The Case of the Astronaut: Narcissism in the Birthchart

The Case of the Astronaut: Narcissism in the Birthchart 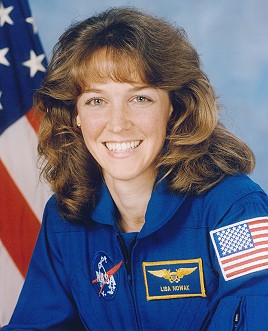 Any time someone does something completely bizarre and out of character, it’s always makes me want to look at their astrological chart. Often we have subconscious elements that we are able to keep in the “basement” of our psyche until one day something begins to stir the pot and those buried parts of ourselves make themselves known. This periods are often associated with planetary cycles called transits.

Lisa Nowak was selected to be an astronaut back in 1996 and ten years later went into space on a journey to the international space station where she was the mission flight engineer. Married since 1988, she has three children but separated from her husband in January of 2007. This week she was arrested for attempted murder and kidnapping of a suspected rival for a man whom she described as being “more than a working relationship but less than a romantic relationship.”

Lisa Nowak has a complicated astrological chart. Her Sun is in the fixed sign of Taurus that craves stability and harmony, and it is in a challenging relationship (square) to Saturn, the planet of isolation, restriction and limitation. With Saturn in square to the Sun, which represents the essential Self, there is often a lack of self-esteem and a feeling of abandonment and loneliness. This system is exacerbated by another challenging aspect between Neptune and the Sun. Neptune tends to dissolve material reality and induce us to seek experiences that go beyond the material world, but in a challenging aspect (particularly with the Sun) there is a dissolving of our sense of Self and a tendency towards escapism and self-deception.

In this case Saturn and Neptune are both square to the Sun, applying pressure to Lisa to develop a firm sense of her own identity while creating blocks in her ability to do so. Saturn and Neptune work against each other in the best of circumstances: Saturn urges us to develop strength and practicality by frustrating our desires and placing roadblocks in our way that force us to work harder to achieve our goals, while Neptune encourages us to go beyond the dry logic of materialism and connect to the world of spirit by opening our eyes to worlds beyond in a way that often makes it difficult for us to find our footing.

The planet Mars in Lisa’s chart falls in Leo and squares the Sun and Neptune and opposite Saturn, forming a Grand Cross in fixed signs. The addition of Mars heightens the intensity of her rage (Mars) and shows a desperation to have her needs met (Mars opposite Saturn and square Neptune). The Grand Cross is a very difficult planetary combination but one that when integrated shows a powerful personality with strength and spirit. Often, however, that power comes at a great price and with a lot of hard work on oneself. Without that work, the personality can begin to splinter as these four opposing forces fail to bridge the gap between them.

Lisa’s chart also shows a Grand Trine in Fire planets: Venus in Aries, Mars in Leo and the Moon in Sagittarius. The trine is a harmonious aspect, which many people define as “good” because the energy of the planets flow together, and the Grand Trine multiplies the ease of the trine creating a complacency and self-satisfaction. While difficult aspects like the T-square create discomfort in the individual, they provide strong motivation for change and evolution and build strength of character that helps us to get through difficult times. Fire is the element that while inspirational and creative also tends to be self-motivated and egoistic, and the Grand Trine in fire shows someone who is bold and has tremendous faith in herself and a lack of fear. Bil Tierney writes of the fire Grand Trine:

“the individual’s strong and unshakeable belief in himself does allow him to succeed in his endeavors more often than not. … He may, however, unconsciously be very demanding of attention, loyalty and even service from others while remaining emotionally unaffected by or even oblivious to their personal needs.”

If an individual with this combination of a challenged sense of Self (the Sun/Saturn/Neptune T-square) with the egoistic focus of the fire Grand Trine does not work diligently to develop a healthy ego, a personality disorder is apt to follow. James Masterson, a noted expert in personality disorders, writes (as quoted in Wikipedia):

The lack of this inner development is the key to borderline problems, which occur when a young child fails to separate her own self-image from that of her mother. This happens roughly between the ages of two and three, often because of a parent’s own emotional problems. A mother’s encouragement of a child’s self-assertion is vital. When the mother suffers from low self-esteem, she has difficulty encouraging her child’s emerging self. The child experiences this absence as a loss of self, creating feelings of abandonment that lead to depression. To deal with the depression, the child gives up efforts to support her emerging self. Instead, she relies on her mother’s approval to maintain the esteem of a “false self.”

The lack of self-esteem is shown in the birthchart by Saturn square to the Sun, the “false self” is shown by Neptune square to the Sun. Pathological narcissism arises when the false self is derived entirely from “audience feedback.” Dr. Sam Vaknin writes:

Narcissists are obsessed by delusions of fantastic grandeur and superiority. As a result they are very competitive. They are strongly compelled – where others are merely motivated. They are driven, relentless, tireless, and ruthless. They often make it to the top. But even when they do not – they strive and fight and learn and climb and create and think and devise and design and conspire.

A Maryland psychiatrist interviewed by the Baltimore Sun describes Lisa Nowak’s behavior as suggestive of Narcissistic Personality Disorder. “When a narcissist’s achievement or conquest is thwarted, he or she can fall into a rage, Vaeth said. ‘When the right buttons are pushed, they explode.'”

Lisa was going through a number of planetary cycles that would have been pushing these buttons. Since last summer Saturn was making a number of passes over the difficult T-square involving her Sun, Saturn in her chart and Neptune. Transits of Saturn create pressure on us for change, and often are extremely stressfully personally and financially. In her case, this event would have activated her own sense of despair (Sun/Saturn) and delusion (Sun/Neptune). To make matters even more difficult for her, transiting Neptune (which is opposite Saturn in the sky) also began a pass over these sensitive points last fall which added more confusion and a dissolving of her tenuous hold on reality.

The tipping point came this week when the veneer that held Lisa Nowak’s fragile personality together came apart. Hopefully this will be the event that motivates Lisa to seek the help she needs to be able to integrate her personality and realize the tremendous potential that lies hidden in her birthchart.