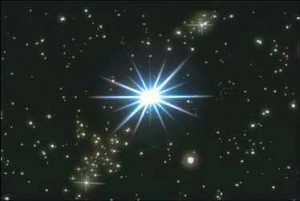 Two thousand years ago, astronomy and astrology were considered one and the same. The motions of the heavenly bodies were used to determine the events of history, and the fate of people’s lives. Of the various groups of priests and prophets of this period, those which commanded the most respect were the Magi – whose origins are not entirely clear. Known as ‘wise men’ , we can only assume they were actually priests who relied on their knowledge of astronomy/astrology. [It is widely assumed by students of the esoteric arts that the Magi were astrologers from Persia.]

Armed with an approximate date, Dave assumed the ‘Star of Bethlehem’ was not just a localized event and could be observed by sky-watchers elsewhere in the world, not just by the Magi. Historical records and modern-day computer simulations indicate a rare series of planetary groupings, also known as conjunctions, during the years 3 BC and 2 BC In fact, this was one of the most remarkable periods in terms of celestial events in the last 3,000 years!

“Like the final pieces of a difficult jig-saw puzzle, our fabled biblical beacon is starting to reveal itself,” David said. “On 12 August, 3 BC, Jupiter and Venus appeared very close together just before sunrise, appearing as bright morning ‘stars.’ It would have been visible in the eastern dawn sky of the Middle East from about 3:45 to 5:20 a.m.”

But it didn’t stop there. The crowning touch came ten months later, on 17 June 2 BC, as Venus and Jupiter joined up again in the constellation Leo. This time the two planets were so close that, without the use of our modern optical aids, they would have looked like one single, brilliant star.

According to Dave’s research, Jupiter was known as the “planet of Kings” and Saturn as the “Protector of the Jews”. This could easily have been interpreted as a sign that the Jewish Messiah had been, or was about to be, born. Also, Leo was thought to denote royalty and power. An interpretation? Perhaps. But, do not forget the times in which this occurred. Astronomy and astrology intermingled. This whole sequence of events could have been enough for at least three astrologers to see this as sign in the heavens and make their way Jerusalem.

Stay tuned for more theories about this planetary event that changed the world!