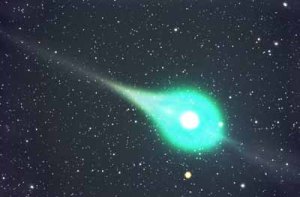 Comet Lulin will make its closest approach to Earth on February 24.  Joseph Mina wrote in the comments a few days ago, ” interesting how Comet Lulin, whose orbital movement is opposite (clockwise) the planets, will conjunct Saturn during the current Saturn/Uranus opposition. Wonder what message this “uranian type” cosmic messenger has to share?”

(See earlier article here.)  This Comet is particularly Uranian because its orbit is in the opposite direction from other planetary bodies.  It does not appear to have a regular visitation pattern, and coming during this intense Aquarian time perhaps it brings a message of surprises that come out of nowhere to completely change our world.

Comet Lulin is making its visitation on the day of the New Moon when six planets are in Aquarius and the New Moon is in Pisces.  Pisces is the sign of transcendence, where ordinary reality becomes blurred and we become open to higher powers, divine beings, and creative inspiration.  Combined with the sudden electrical surprises of Uranus and Aquarius, the transcendence of Pisces creates an openness to the spiritual realms that can be quite intense.

The comet will be traveling through Virgo when it is visible, and it will be very close to Saturn so it will set off the opposition of Saturn and Uranus.  The New Moon also forms a sextile to Pluto, so there is a transformational element at work here.  The symbology of the Comet, a temporary visitor to the Universe in the midst of this planetary festival, suggests to me a dramatic turn of events that gets our attention!