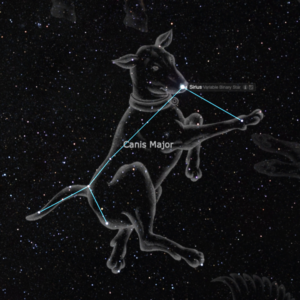 The star Sirius, the brightest star in the sky, is in the constellation Canis Major. Sirius was the most important of the stars and formed the foundation of ancient Egyptian religion. It was considered to be a second Sun since its heliacal rising matched the length of our solar year at 365.2 days. This rising (conjunct the Sun) of Sirius came at the time of the inundation of the Nile, which was crucial to the survival of the ancient Egyptian culture. This was the Egyptian New Year (also called “The Opening of the Year”). This period, which occurred in late June 5,000 years ago but now takes place in mid-July, coincided with the hottest time of the summer, and the ancient Egyptians believed that the heat was caused by the conjunction of the Sun with Sirius.

There are various theories as to why Sirius is called “the dog star”. One of course is the fact that Sirius is in the Canis Major, or Big Dog, constellation but it was called the “dog star” long before the Romans applied that name. One theory connects Sirius with Anubis, the dog-headed god, and one story tells of the dog of Osiris. However, the symbolism of Sirius as a dog star is consistent throughout the ancient world.

There is increasing evidence that many of the founding fathers of the United States were Freemasons, and fascinated with astrology. David Ovason’s excellent work The Secret Architecture of our Nation’s Capital describes 23 zodiacs that are embedded in the architectural elements in Washington DC, and the alignment of many buildings such as the Washington Monument with the star Sirius. There is evidence that astrologers such as Ebenezer Sibley were consulted for the timing of the signing of the Declaration of Independence on July 4, just as Sirius was rising in conjunction with the Sun.

The Dog Days of Summer have been associated with both positive and negative events. Dogs were considered to be more rabid over the summer, and when the air and water was stagnant there was a greater possibility of disease. However, in ancient Egypt they were the most holy days, when the tears of Isis flooded the Nile and saved the crops for another year.