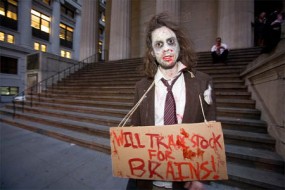 The Fed wants investors to become zombies like them, under the illusion that reflating asset prices makes investors feel wealthier so they’re more likely to spend and employers are more likely to hire and grow their businesses. As PIMCO’s Bill Gross writes in his latest Investment Outlook: “The Fed, on Wednesday, however, will decide that it is better to keep the patient on life support with an adrenaline injection and a following morphine drip than to risk its demise and ultimate rebirth in another form.”

By trying to spare the economy from Pluto/Scorpio’s death and dying process that will take place one way or another over anyway, the Fed is only prolonging the pain at best and at worst runs the risk of keeping the economy in a zombie-like state for the next several years. Wall St. knows another round of quantitative easing won’t work, but they’ve become too addicted to the Fed’s drugs. That’s why the lead story in Wednesday’s Wall Street Journal hinting that QE2 could be much less than what the market was anticipating was enough to give the market pause. Imagine how the market might react if Bernanke was bluffing.

This is what I’ve been saying too, and with Jupiter and Uranus moving ever closer to their conjunction right around New Year’s the euphoria is likely to continue to drive an optimistic market.

Pluto is still in Capricorn until 2023, making a crash to reality virtually assured at some point.  The markets can probably ride on pure euphoria through the end of the year which may generate enough momentum to push the economy forward so that the markets are standing on solid ground instead of mere optimism.  Saturn stations retrograde in late January, inspiring a re-evaluation of our reality, and shortly thereafter Venus enters Capricorn and squares Saturn.  These are not highly positive signatures for economic expansion.

This is not financial advice, but if it was I might consider this to be a good time for stock investing, keeping in mind that as long as Pluto is in Capricorn caution is advised.  I would probably mark the mid-January period to sell anything that doesn’t have very strong fundamentals as there are some signatures in February that look problematic for financial decisions.