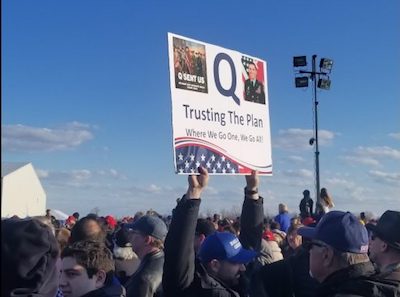 Eclipses are often associated with the unmasking of something which has been secret or repressed, and a lunar eclipse, which occurs at the Full Moon, can expose the creatures of the night such as cockroaches and werewolves.

So it’s not totally shocking that the underground right wing conspiracy group called QAnon has suddenly emerged into the light of day and into mainstream consciousness.  This uniquely American phenomonon apparently began in October of 2017 and in the months that have ensued a variety of beliefs have emerged that center around a character known as Q who is an insider in the Trump administration who is dropping secret information to its followers.  Alex Jones and Jerome Corsi, well known leaders of right wing conspiracy theories, told their followers that QAnon has been corrupted and co-opted by the CIA and NSA in early May.  Throughout its history this group has become known for wild theories with no basis in fact, such as Pizzagate in which it was said that leaked emails written in code revealed that Hilary Clinton and John Podesta were carrying on a sex trafficking ring under a pizza parlor in Washington DC, resulting in death threats to the proprietor.

Other news articles have been creeping into the news lately but it wasn’t until the kickoff of President Trump’s “MAGA Tour” right after the lunar eclipse on July 27th that knowledge of the existence of QAnon reached critical mass.  At the kickoff rally in Tampa, signs and T-shirts declaring “We are Q” revealed the explosive emergence of this fringe group into the mainstream.

I’ve been writing a lot lately about the transits to the US chart involving Pluto and the upcoming Pluto return in the US astrological chart, the time when Pluto in the sky aligns with Pluto in the chart for the United States.  Pluto is the planet that represents death and regeneration, but in its role as Lord of the Underworld it also exposes the dark and reveals the hidden.  Since 2014 Pluto has been applying pressure on the US chart, and will continue to do so leading up to the Pluto Return which begins to align just in time for the 2020 election.

There is a saying that we can see the darkness more clearly when it is illuminated by the light and I believe that this is what is happening now.  It’s so important now to focus on the light and continue to shine the light of wisdom and clarity into the world, even when we are confronted by what seems to be ever increasing darkness.  We cannot run from this darkness or let it chase us into the shadows.  But we also need to remember that everything has a season, and we are in Pluto’s realm now.