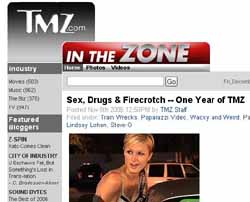 One of the things I most like to post about on this blog is celebrity profiles and profiles on celebrity couples.  First of all, with Gemini rising I love a good gossip.  But more important, they make great demonstrations of how great a tool astrology can be to help understand the underlying personality characteristics that drive us to behave in certain ways.

Pluto’s travel through Sagittarius, the sign that rules, among other things, journalism, entertainment and celebrity, has brought the passion for celebrity journalism to an obsessive (Pluto) crescendo.  Princess Diana was supposedly killed (Pluto) fleeing a pack of papparazzi (Sagittarius) back in 1995.  The furor over Paris Hilton and other celebrities famous only for being famous is a hallmark of Pluto in Sag.

Usually when life is difficult people turn to fantasy for comfort, such as during the recession of the early 1980s when TV shows like Dynasty and Lifestyles of the Rich and Famous were very popular. (It’s an interesting factoid that Lifestyles of the Rich and Famous began in 1982 and ended in 1995, following exactly the timing of Pluto’s trip through Scorpio).  But with Pluto  soon to be firmly settled into Capricorn for the next 15 years, the obsessive interest in celebrity seems to be on the wane.

This is nowhere more evident than in the decline of TMZ.com, one of the brashest and most Sagittarian of the celebrity blogs:

It would be unrealistic to say the end is near for TMZ.com, the gossip website founded by Harvey Levin that Mel Gibson’s anti-Semitic tirade put on the map. But all signs are pointing to trouble for the AOL-Telepictures celebrity venture. Readership is down. So is revenue. Top staffers are leaving. The spin-off show TMZ has lost its buzz. And TMZ.com just saw People.com overtake it for the No. 2 spot of most-visited celebrity websites (Yahoo’s OMG is No. 1, thanks to all of the search giant’s traffic dumping). …

TMZ will live and die by the celebrity news cycle. In the beginning, TMZ reacted to it: Michael Richards said something racist? Post! Lindsay Lohan got in an accident? Post! Now, they’re practically manufacturing celebrity news, or at least trying to redefine the criteria for what makes something newsworthy. Part of this is the fault of … celebrities. Britney Spears is cleaning up her act. Paris Hilton has been staying home some nights. Lindsay Lohan is dating Samantha Ronson, and keeping out of trouble. But that doesn’t mean, say, alawsuit filed by former Baywatch star Nicole Eggert against his ex-boyfriend is newsworthy. So why the breathless reportage? Because there’s nothing else going on.

I’ve certainly been noticing that myself as I hunt for interesting celebrity news to post on.  Celebrity profiles are much less interesting when there’s nothing really newsworthy going on there.  So it looks like my astrological profiles are going to have to be a lot less gossipy and more like serious journalism.  And really, that’s not a bad thing.