The end of relentless optimism

The end of relentless optimism 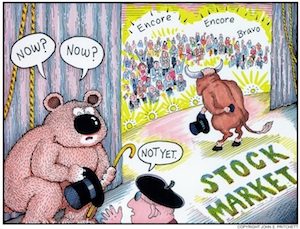 Pritchett Cartoons  The realism of Saturn in Virgo is beginning to have an effect on the continuing determined optimism of Jupiter and Pluto in Sagittarius with some of the more inflated (Sagittarius) stocks, mostly in tech, falling to more realistic levels. Apple, buoyed by the frenzy over the Iphone, fell almost 40 points in less than a week, and Google, having climbed 130 points in less than a month, fell 100 over the past few days.

The rise of these stocks coincided with the square of Jupiter (expansion) to Uranus (tech), an astrological signature that was considered by some to bring about a sudden downward shift in the markets; the Dow Jones Industrial Average peaked just at the point of the partile (exact) square. These signatures rarely work the way they expect them to, particularly where Uranus is involved, and the shift was in the upward direction rather than down. Uranus works by surprise, and will tend to bring whatever you least expect! But now that its influence is on the wane, Saturn is injecting reality into the situation and bringing Virgo’s cautionary nature into play.

This is not just an American problem, although the problems in the US with the falling dollar and housing market are causing a ripple effect in markets around the world. Asian markets fell yesterday, as did Canada’s. There are fears about the long-term stability of the US economy due to the falling dollar and housing market and I predict that the final conjunction of Jupiter and Pluto in Sagittarius in mid-December and Pluto then entering Capricorn in 2008 will mark the end of this long cycle of optimism.

At that point speculation will be a fool’s game and old-fashioned saving will come back into favor.