The Fed Still Doesn’t Get It

The Fed Still Doesn’t Get It 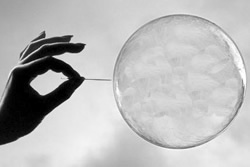 The current economic downturn is caused by a global contraction and correction.  From an astrological perspective, this correlates closely to the entry of Pluto into Capricorn which demands facts and a strong foundation in order to achieve economic growth.  For the past 13 years, as long as Pluto was in Sagittarius (the sign of expansion and optimism), economic growth was generated by optimism and the inflation of debt which fueled a spending spree around the world.

The US Federal Reserve yesterday dropped its funding rate to the lowest point ever, hoping to generate more borrowing in order to generate economic growth, and also indicated that it was going to increase the money supply in an attempt to stave off deflation.  The problem is that the mood of this economic downturn is driven by the overall influence of Pluto through Capricorn which requires that any system which is corrupt or built on anything other than solid fundamentals be broken down and rebuilt.

The sign that Pluto travels through sets the global mood and fixation.  When Pluto went through Scorpio, the sign of sexuality and secrets, AIDS and repressed memories were on everyone’s mind.  In Sagittarius, the sign of expansion and optimism, it seemed that the housing and stock markets would always go up and never come down.  In Capricorn, the sign of hard work, discipline, and the reality check, the “frugalista” has replaced the “fashionista” and even those who can afford to spend, spend, spend are staying home instead and stuffing their money in the mattress.

We’re dealing not only with Capricorn now, but also Saturn in Virgo which treasures thrift and frugality above spending and impracticality.  Warren Koontz of Loomis & Sayles does get it:  “We do have to pay penance for the over-living of the past decade.”

The beauty of Capricorn is that it rewards us for our hard work and conservative approach to business and finance, so this is a terrific time to buy stocks in good companies with strong fundamentals.  Paying off credit cards, saving and cutting costs – all of these are sensible approaches to the current climate.  Increasing debt and spending to boost the economy, unfortunately, are not.