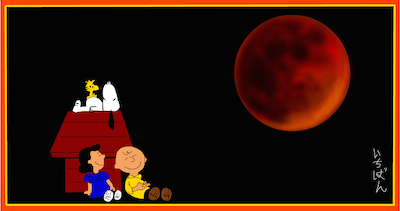 The evangelical rumor mill has jumped on the bandwagon, claiming that at the end of this current Tetrad the world will end, or Christ will return, depending on who you read.  Some writers have linked their conspiracy theories to the fact that these eclipse tetrads often fall on Jewish holidays; however, since Jewish holidays are tied to Full Moons it’s not surprising that we see this effect.

All of this leads to the Full Moon lunar eclipse in Aries on September 27th.  This is another SuperMoon – in fact, it is the closest SuperMoon of the year and therefore most powerful.  It is also a powerful eclipse astrologically because the nodes of the Moon are in a tight conjunction to the lunation (within four degrees) and in the same sign.  Eclipses occur when a lunation (New Moon or Full Moon) are within 15 degrees of the lunar nodes, but the closer they are, the more powerful the effect.

Because the lunar nodes are connected to fate and destiny, an eclipse which is tightly connected to the lunar nodes will often bring with it an event or an eruption into consciousness of a lesson that will affect us for many years to come.  These occurrences aren’t always obvious when they occur – sometimes they take quite a while to manifest.

With an Aries Full Moon eclipse (Aries Moon opposite Libra Sun), the drive for individuality that is the hallmark of the Aries influence is eclipsed by the Libran need for niceness and harmony at all costs.  Aries’ ruler Mars is in humble Virgo where it is not permitted to achieve all desires instantly as Mars is meant to do, and it is further hemmed in by the challenging square from Mars to Saturn described above.  This Full Moon will require a conscious effort to identify and clarify our needs and desires (Mars/Aries) and develop a plan (Virgo/Saturn) to fulfill them in a way that maintains balance and harmony in our personal relationships and our relationship to the outer world (Libra/Venus).