Ever since I took a workshop on Geodetics I have been fascinated by the idea that every part of the world has its own astrological signature that affects the lives of the people that live in that locality.  I hope some day to be able to discuss this idea with some degree of knowledge, but for now I’ll let Kathryn do the talking. She has a new article linking the Haitian earthquake and storms in Madeira with the Geodetics concepts.  It’s a fascinating read!

What you are looking at here is a map of the world divided into equal 30 degree sections of the 12 signs of the zodiac, centered on the Greenwich Meridian i.e. 0 degrees E/W or 0 degrees of the sign, Aries.

These are purely symbolic divisions as, quite obviously, when looking at any sphere or circle there is no beginning and no end point. However, since the Prime Meridian line was finally fixed to Greenwich (at one time there were many ‘start’ lines, two of these famously passed through Paris and in Washington DC) astrologers have noticed an uncanny correspondence between the position of transiting planets and these divisions – more specifically the position of the Sun and the faster moving planets, Venus or Mercury, although other correspondences can be noticed.

In astrology, when the Sun is in a house division it symbolically ‘shines a spotlight’ on issues relating to that division. The same appears to apply when we look at these symbolic divisions of the world on a map. As Above , So below; As within, So without; As in chart divisions, So on land divisions!

What is noted is that when the Sun enters one section, countries, or a country, located in that section will often hit the news headlines.

For example on 20th Feb 2010 the island of Madeira was hit by terrible floods. At this time 3 planets, Sun, Venus (and Jupiter) were in the sign of Pisces. If we put these planets on the map this is what we see. The Blue line is the Sun line, the red is Venus and I have shown Jupiter too: 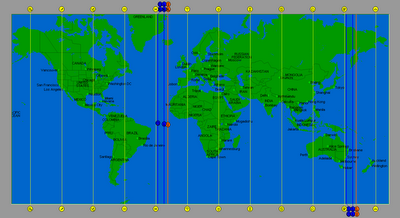 The lines are in the section containing Madeira.

Likewise if we look at the earthquake in Haiti we would expect to see planets in the Capricorn to Aquarius division, which lie either side of the island. Indeed we do. On that date the Sun and Venus were in the section enclosing Haiti and close to the island : 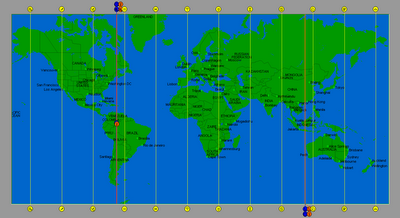 You don’t have to be an astrologer in order to follow this map to see if this theory holds true throughout the year. Bookmark it and return to it throughout the year when specific news events that bring a world focus to a country occur. The proof is in the pudding so to speak!