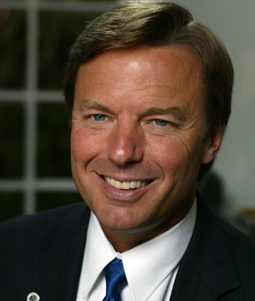 Out of respect to the Edwards family and in response to the comments of my thoughtful readers, I have edited this post.

I confess that during the Presidential campaign I became disillusioned by John Edwards, beginning with his sudden passion for populism.  Having observed him during his time in the Senate, I knew that Edwards had never shown any interest in the working poor, and this sudden crusade rang false to me. The Edwards’ live in a famously huge mansion on 100 acres outside of Chapel Hill on a property that is ringed with “no tresspassing” signs, and their children attend the prestigious Chapel Hill schools even though they live outside of the district.  To me, this is the very two Americas that Edwards spoke so passionately against.

Last week I read in the news that Edwards had ended a a scholarship program that he began during lead-up to his presidential run now that his presidential aspirations had failed which appears to me to be a confirmation that the passion for the poor was a passing fancy.

I first heard of the National Enquirer rumors about Edwards’ supposed affair last winter but in view of Elizabeth Edwards’ battle with cancer I, like other writers, chose not to address these rumors.  Today Edwards admitted to ABC News that he had an affair back in 2006 with Rielle Hunter.  Ms. Hunter had a baby in February of this year that was rumored to be Edwards’ but campaign officer Andrew Young claimed paternity.  Young has since moved, with his wife and family, out to California to be with Mr. Hunter.

Last year I wrote this profile of John Edwards:

Edwards is driven both by a sincere desire to help people and a fierce ambition combined with a brilliant intellect. But with four planets in Gemini, he has difficulty focusing. Gemini of course is the sign of the twins, the sign of communication. Gemini has a thirst for experience, an intense curiosity and brilliant mind. Gemini is the jack of all trades and extremely versatile; they are chameleons who can change their skins frequently and in fact they usually dislike becoming overly involved in one particular project. The career of John Edwards has reflected this trait.

Gemini usually bestows a youthful appearance, and we can see this in the face of John Edwards as well. Edwards was an extremely successful trial lawyer for 20 years, representing families and children before entering politics. After the death of his son in 1996 he gave up on his dream of a family law business and went into politics and it was at this point that he appeared to lose his focus. He won the Senate seat in North Carolina in 1998 but almost immediately began pursuing higher office and was reportedly on the short list for vice president in 2000. We Democrat consistuents were dismayed at the lack of commitment that Edwards showed to his party and to the state in not waiting for his term to be completed when he began campaigning for president as early as 2001.

In 2004 when Edwards retired to run for president that Senate seat went to Republican Richard Burr. After his presidential bid failed he became the first director of a new Center on Poverty at the University of North Carolina – a post that he just resigned in order to run for president. John Edwards is an extremely likeable guy – my friend ran into him at the local physical therapist and was overwhelmed by his charm and his chatty friendliness. There is no doubt that he is brilliant. However, his political history reflects the lack of focus indicated in his birthchart and I was doubtful whether he has the ability to stick to a position as intense as President for four years and really focus on the issues at hand.

The four planets in Gemini in the chart of John Edwards are the Sun, Mars and a conjunction of the Moon to Mercury. This is a powerful Geminian influence that is the fulcrum of his chart. Mars in Gemini shows that he is driven (Mars) to experience a variety of things and to learn (Gemini), but also that his physical energy (Mars) can be scattered and unfocused (Gemini). Moon in Gemini shows an emotional need (Moon) for variety and a dislike of convention (Gemini). There is also a need to talk and communicate one’s feelings and this can lead to an intellectualization (Gemini) of the feelings (Moon).

Jupiter in Gemini suggests success (Jupiter) will come through communication (Gemini) but also that the Gemini tendency to multitask and seek variety becomes expanded (Jupiter). Most importantly, the conjunction of Jupiter to the Moon indicates an individual who is on a mission (Jupiter). There is an expanded (Jupiter) sense of compassion and nurturing (Moon) and an inner sense of righteousness in one’s path. Jupiter is the King of the Gods after all, and can often bring the kind of self-righteousness we have seen with religious and political leaders whose Suns are connected to Jupiter.

Rising in Edward’s chart is the nurturing sign of Cancer and Mercury (thought process) is in that sign as well, showing that he is very concerned with taking care of others. Cancer is a “cardinal,” or active sign so the nurturing that it provides is very action-oriented: feeding the poor, organizing groups of social conscience. Cancer is also driven by love of family and very protective of their loved ones. It is no wonder that Edwards’s trial practiced focused on families. With Mercury in Cancer his thinking process (Mercury) is colored by the emotional sensitivity of Cancer which gives him a strong sensitivity to the needs of others. However, he is likely to be somewhat moody and make important decisions based on the feeling of the day.

Venus is in Taurus in his chart showing that his relationships (Venus) provide the stability that he needs (Taurus) and help to ground him. A challenging T-square in the chart of John Edwards may help to explain what drives him relentlessly towards the Presidency. Saturn and Neptune are conjunct in his chart in the fourth house, a configuration that combines the desire of Saturn to create form and achieve success with the urge of Neptune to dissolve form and withdraw into the world of spirit. There is a deep inner conflict here that is made stronger by the fact that both planets are retrograde and therefore operate a a more internal level. When Saturn is retrograde in a birthchart it also shows an individual who is self-critical and feels a lack of self-worth on a deep level. Ultimately the goal of this conjunction is to successfully unite the energy of the two planets by giving form to our dreams and ideals rather than dividing in conflict between these two directions.

Uranus squares Saturn and Neptune as it does in the charts of many babyboomers, indicating a conflict with authority figures and conventional society (Saturn/Uranus) and between one’s ideals (Neptune) and the reality of change (Uranus). Saturn and Neptune are both squared by Chiron, showing that this confusion between the world of matter and the world of spirit is a deep wound (Chiron) that Edwards carries within him. Chiron intensifies the negative self-talk of his retrograde Saturn and creates a relentless need for him to prove himself. I believe that this is the underlying element that drives his political ambition.

Transiting Pluto has been opposing Venus in Edwards’ progressed chart since the beginning of the year, a long term cycle that will continue into next year, turning his relationships (Venus) upside down.  This cycle was in its first phase when Elizabeth Edwards was diagnosed with terminal breast cancer.  At the same time, transiting Uranus began a two-year cycle in a challenging formation (square) to Edwards’ Sun.  Uranus seeks freedom and change, and when we have Uranus squaring our Sun we are restless and rebellious and long for something new and different.  Uranus is retrograding back now towards the square to his Sun and will make a station (stand still) between October and January, intensifying this urge to flee and creating all kinds of bizarre situations for him.

All public figures must play out their challenges in the public eye, making the entire process so much more difficult.  But for astrology students, understanding the planetary effects behind the news can bring the lessons home in a way that book study cannot.