The magic of Samhain and the journey to Hallowe’en

The magic of Samhain and the journey to Hallowe’en 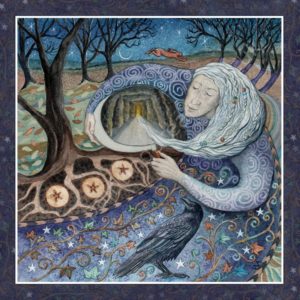 I just returned from a trip to Ireland, where the holiday of Hallowe’en is said to have originated with the ancient Celts who called this holiday Samhain, or “summer’s end”.  Traditionally the holiday was celebrated on November 1st, but some sources say that the festival lasted seven days, or even nine days.  In Ireland there was a huge assembly at Tara where the kings met to craft their laws and the common people held celebration.

In medieval Europe the pagan (country) people celebrated the the midpoint of the fixed signs as periods of power.  These times correspond to the fixed signs of Aquarius (Brigid in February), Taurus (Beltane in May), Leo (Lugh in July) and Samhain (pronounced Sow’en) in October for Scorpio.  These times exactly between the solstices and equinoxes, and are called the “cross-quarter” days.  Early Catholic leaders adopted the festival of Samhain as All Saints Day and christianized the holiday to encourage praying for the souls of the departed.

While Samhain has been adopted by Wiccans and other followers of witchcraft, I think we have finally come past the equating of ancient holy holidays with witches and demons.  These are nature festivals of spirituality which we can use to honor the holy cycles of nature and the ebb and flow of life.

At Samhain it is said that the veils between the worlds grow thin, and it becomes easier to communicate with the souls of loved ones who have passed on.  They are also more easily able to offer advice, and divination is a key part of Samhain festivals even today.  Samhain marks the beginning of the dark half of the year, after the balance of light and dark at the equinox.

Samhain was not specifically a festival for the dead – it is a liminal time when there is free passage between planes of existence.  Souls of the dead, but also the fey, the faeries, pucas, spirits of trees and air, etc. could freely move between their world and ours.   In Latin America and other Catholic countries the Samhain theme has been christianized to become festivals of the dead such as Dia de los Muertos.

Astrologically, the entry of the Sun into Scorpio in the northern hemispheres marks the return of the dark time, where we are drawn into the darkness of our own psyche to discover the treasures that lie there, ready to be harvested.  In the southern hemisphere of course the nature of the experience is different because the days are getting longer rather than shorter. The actual astrological cross quarter point occurs when the Sun reaches 15 degrees Scorpio, which this year occurs on November 7th.

Spirits of nature and ancestors may be nearer now than at any other time, so delve deep and mine the secrets and treasures that lie on the other side of the veil!