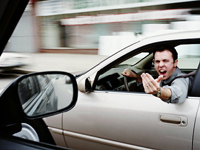 I wrote a post with this title back in December when Mars was slowing down in preparation for its retrograde turn, and now Mars has slowed down as it prepares to turn direct on March 10.

Mars typically is a fast-moving planet, spending on average two days to travel one degree.  At the moment Mars is traveling only 11 minutes of arc (about 1/6 of one degree) a day, and will only move another degree or so before making its turn to move forward again.

When there was a great deal of celebration back in December over the passage of health care, we astrologers just laughed.  “Mars just turned retrograde,” we said, ‘It’s not over yet.”  Once again, we were right!

As Mars slows down, the intensity of the aggressive energy that it brings will become more pronounced, especially if it hits a sensitive point in your chart (the early degrees of the fixed signs Taurus, Leo, Scorpio, Aquarius).  It’s very important to be able to express and release this intensity so that it doesn’t back up into some sort of explosion.  We are seeing this amplified on the world stage with political rage reaching new heights in every area of the world.  And recently there have been vicious accounts of road rage incidents in Miami, Orlando, Dallas, Pennsylvania, Sydney Australia, Massachusetts, Lincolnshire and West Cumbria UK, even Utah and Iowa.

Even after Mars turns direct it will take another two weeks or so to pick up the pace of its motion, so we will be in a Mars-y period for the next month or so.  Mars is impulsive and rash – it tends not to think through a problem or situation but instead to react instinctively.  This is our opportunity to learn how to handle that aggressive energy and channel it constructively: to set good boundaries and assert ourselves calmly and appropriately.

But don’t be surprised if there are plenty of people around you who just allow Mars to light a fuse that sets them on fire instead!