The meaning of the December 14, 2020 solar eclipse

The meaning of the December 14, 2020 solar eclipse 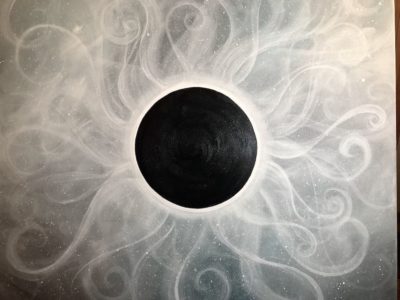 I think it’s safe to say that eclipses are one of the many things on which astrologers disagree.  Do they cause major events?  How long do the effects last – three months? Six months? One week?  Two-three weeks?  Astrology is not a fixed science – rather like meteorology, it’s difficult to make precise predictions because the world is always changing. A planetary transit will affect one person one way at one time, and completely different another time (if you are over 60 you can see this in your own life by looking at your first Saturn Return age 28-30, and your second one age 56-60).

In any event, we have a solar eclipse on December 14th, the second in a pair (the first, a lunar eclipse, occurred November 30th).  A lunation becomes an eclipse when the Sun and Moon are in tight aspect to the lunar nodes (the points in the sky where the path of the Moon crosses the path of the Sun).  This is what gives an eclipse the quality of a fated experience – the lunar nodes represent our journey from past to future.  In both of these eclipses the Sun conjoins the South Node, suggesting that the path to letting go of past experiences which hold us back is illuminated now, but in the solar eclipse the Sun is darkened by the shadow of the Moon.

The Sun represents our conscious intention and the Moon represents our instincts – the way we operate on a more internal level when nobody’s looking. In the solar eclipse these conscious intentions are eclipsed by the shadow of the Moon and therefore able to emerge in a way that they might not normally be able to do. Remember, the New Moon is actually the dark of the Moon – the end of the lunar cycle. We’re letting go anyway, we’re sweeping out the debris at the past, and we’re leaving room for the future. There’s a big release during this solar eclipse of outmoded ideas, anything that you feel no longer suits you, which makes it a wonderful time to begin to create a new philosophy; a new way of looking at the world. 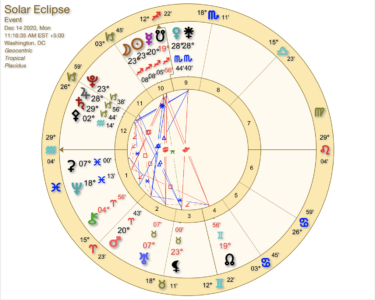 Sometimes the things that are the most comfortable, the most familiar, the places where we retreat in order to feel safe (South Node), are the same things that hold us back from the future (North Node). The South Node is in the sign of Sagittarius, which is a sign of belief systems, optimism, faith, and expansion. But when we’re talking about the polarity between Gemini and Sagittarius, we’re really talking about how we process ideas. They both have to do with ideas and learning. But with Sagittarius, we become enamored with a certain idea that gives our life meaning and it becomes our truth. Because Sagittarius is always looking ahead, we then start to look at the next truth but all the while we’re still looking for that one thing that’s going to give us meaning.  Gemini (North Node) is more open minded, more curious, but also lacks discrimination.  Under the influence of Gemini we observe everything with curiosity and without judgment.  Neither is good, and neither is bad. But because we have the South Node in Sagittarius at this eclipse, the belief systems that have controlled us for our whole lives and for quite some time, will need to fall away.

We have assistance in this New Moon from Mars in Aries, harmonizing in a trine to the Sun and infusing that fiery energy to help motivate and inspire passion and action. There is a strong mental component because Mercury conjoins the Sun and Moon, encourages intellectual understanding.  All of these planets in Sagittarius are helping to fuel and energize us, and motivate us to create this new way of living, of looking at the world.

The world is changing around us and we must evolve as well.  Any Sagittarius New Moon offers an opportunity to expand our ideas of what is possible.  We must recognize that some things from the past are gone forever, but there is a bright future waiting once the storm clouds clear.  What are the essentials that you want to bring into the new world, and how will you rebuild a happier future?

Political note: This solar eclipse at 23 Sagittarius falls exactly on the natal solar eclipse in the chart of Donald J. Trump, conjunct his natal Moon and South Node.  It also takes place in the 10th house of the US chart, the house which in a mundane chart represents the executive branch and the actual government of the nation.  I hesitate to make any predictions but I imagine there will be some kind of reckoning, perhaps one of the many legal cases now pending in the New York courts.  The eclipse also opposes Mars in the US chart which will likely not calm the troubled waters of US politics (which are already stressed to the max as we head into the US Pluto return).