The meaning of the pre-Equinox Pisces Full Moon

The meaning of the pre-Equinox Pisces Full Moon 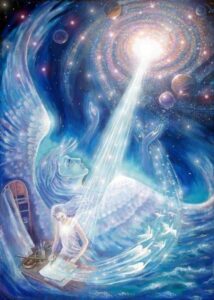 by Lynn Hayes.  At the Pisces Full Moon the Pisces Moon is opposite the Virgo Sun, requiring us to bring into balance the polarity of these  two opposing astrological signs. Pisces, as Virgo’s opposite, lives in the realm of Spirit and ideals rather than the mundane. Where Virgo is concerned with worldly matters required by humans who live in a physical world, Pisces opens the door to the realms that lie within and beyond the soul and psyche. Where Virgo is practical and teaches us to create order, Pisces longs to transcend reality and ascend into more soulful experiences. Neither is better than the other – the mysticism of Pisces can bring delusion and illusion, and the organization skill of Virgo can lead to a limited perspective where the view of the trees obscures our ability to see the forest.

Under any opposition we must learn to create balance and integration between the polarity of two opposing signs, and this is also true at the Full Moon.  The Pisces Full Moon is all about connecting to Spirit, to the Divine within us, to our imagination and a sense of magic.  However, when the Moon is full in Pisces it opposes the Sun in practical Virgo so there is a necessity to balance that dreaminess with a firm footing in the material world. 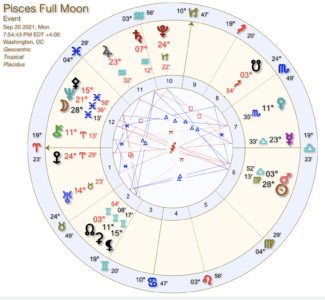 The Full Moon is the peak of the waxing phase of the lunar cycle and begins the waning phase of completion, so this is a time of culmination of the dreams and ideals (Pisces) so that we can harvest the seeds that we have sown. Mercury, ruler of the Virgo Sun, is stationary in Libra right now as it prepares to turn retrograde in a few days and it forms an exact trine to Jupiter, (traditional) ruler of the Pisces Moon, assisting in the integration between attention to worldly details (Mercury/Virgo) and a more expansive view of our own Universe (Jupiter/Pisces), especially with Jupiter in Aquarius where it urges us to seek an elevated perspective. Meanwhile Mars, planet of action, forms an airy trine to Saturn which furthers the tendency to reach for detachment through intuition from higher planes.

Pluto, planet of power, also plays a significant role in the Full Moon chart: it is squared by Mercury to promote a search for the underlying truth, and harmoniously intertwined with the Sun (trine) and Moon (sextile) to forge more permanent transformation.  This Full Moon occurs at the portal to the September Equinox and paves the way towards an energetic shift that carries us from one season to the next. It is well worth taking some time to honor these energies and allow their power to infuse us with the power of lunar magic! ❤️