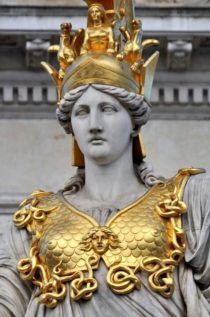 Mercury and Pallas will be traveling together in Scorpio over the next few weeks.  During this period the limited mind of Mercury will be better able to absorb the divine intelligence and wisdom of Pallas, especially since the Scorpio influence deepens our desire to know and understand at the deepest level.  This is an ideal time for spiritual study as our ability to connect our higher intelligence to our own mental function will be enhanced.

The first exact conjunction will be October 21, 2019, although the energy of the conjunction will be building for a few days before.  Venus, planet of love and beauty, will transit Pallas on the 29th and then Mercury on the 30th.  The trio of Venus, Pallas and Mercury will heighten our sensitivity to beauty and add a harmonic appreciation for all lovely things in our lives, but also make any dissonance feel more uncomfortable.  This is a wonderful time for creatives of all kinds.

Mercury turns retrograde on October 31, and returns to a conjunction with Pallas on November 2 as it retrogrades back through Scorpio. The final phase of the Mercury/Pallas dance will occur on December 21st, with both planets in Sagittarius.  After exploring the deep realms of truth in Scorpio, Sagittarius seeks greater understanding and how better to accomplish that than under the tutelage of Mercury and Pallas!

This is not a particularly powerful alignment, not the kind that will hit you over the head with its intensity.  But it does open up portals of wisdom, knowledge, and higher understanding for those of us who remember to listen.