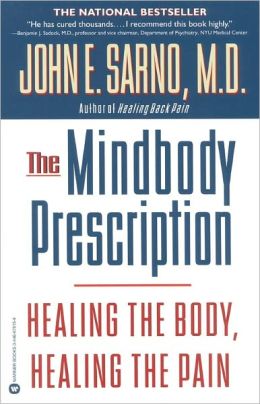 One of my brilliant readers recommended the work of Dr. John Sarno to me because of my interest in energy and healing in the birthchart. After a quick Google search I was hooked and ordered his book: Healing Back Pain: The Mind-Body Connection. I like the way he melds the words “Mind” and “Body” to show that the two are really united rather than two separate entities.

This is the third of three books Dr. Sarno has written on chronic pain.

His premise is that many of the health problems that plague our modern culture are the result of repressed emotional pain and anger that we are unable to bring to a conscious level, so the body creates a distraction in the form of back pain, sciatica, fibromyalgia, chronic fatigue syndrome, gastrointestinal disorders etcetera. Dr. Sarno’s program consists of first eliminating any medical cause for the presenting problem and then encouraging his patients to examine their emotional motivations to see where they might have an underlying emotional conflict that is not being expressed appropriately. In 75% of the cases that he treats this mere attention to the patient’s emotions creates the cure; 25% are referred for psychotherapy to uncover the unconscious root of the problem. Dr. Sarno has found that individuals who have a high need to be perfect, or “good” and who impose strict pressure on themselves develop a “reservoir of rage” that without expression is converted into physical problems.

What is actually causing the pain in these people is not the herniated disc, or some of those other structural things, but a condition of mild oxygen deprivation, which is brought about by the brain simply altering the blood flow to a particular area. This mild oxygen deprivation is what causes pain in muscle.

Take sciatica as an example. There are a number of spinal nerves going into the leg via the sciatic nerve and the brain would mildly oxygen-deprive them. That would then, of course, give you pain in the leg, and give patients feelings of numbness and tingling. It would also produce actual weakness. But doctors have assumed that these changes and symptoms in the leg were the result of some damage to nerves in the low back — as a result of herniated discs and things of that sort. . . .

This is extremely exciting to me because of my research into the astrology of health problems which nearly always stems from an unexpressed or repressed Mars or some other block in the flow of energy in the body that results from emotional blocks. I’m only halfway into the book but already it is helping me to understand more about the way the energy system operates in the physical body from a medical point of view.

This is another example of how science and real healing have diverged in our twentieth and twenty-first century world of science which denigrates the role of the mind, body and spirit and prefers to believe that the physical body is a machine for which emotions play no role. I believe that this idea is the root of our spiraling health care costs and an associated deterioration of health and I am so glad to see more physicians stepping out to connect the dots between the body, mind and spirit.