The Moon: Science and Magic

The Moon: Science and Magic 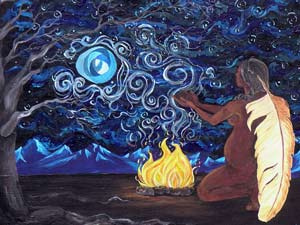 I snagged this artwork from Toltecpath.wordpress.com but it was unattributed. If you know who this belongs to, please let me know.

Magical and astrological traditions have long taught that the influence of the full moon begins three days before the lunation (moon event) and continues for three days after, and now it appears that there is a scientific basis for this teaching:

“Behold the full Moon. Ancient craters and frozen lava seas lie motionless under an airless sky of profound quiet. It’s a slow-motion world where even a human footprint may last millions of years. Nothing ever seems to happen there.

Wrong. NASA-supported scientists have realized that something does happen every month when the Moon gets a lashing from Earth’s magnetic tail.

“Earth’s magnetotail extends well beyond the orbit of the Moon and, once a month, the Moon orbits through it,” says Tim Stubbs, a University of Maryland scientist working at the Goddard Space Flight Center. “This can have consequences ranging from lunar ‘dust storms’ to electrostatic discharges.”

It is during those six days that strange things can happen.

During the crossing, the Moon comes in contact with a gigantic “plasma sheet” of hot charged particles trapped in the tail. The lightest and most mobile of these particles, electrons, pepper the Moon’s surface and give the Moon a negative charge.

It’s not just the magical traditions that speak of the three days before and after a full or new moon being powerful times.

Yogi Bhajan wrote, “There are three days of the moon, when if you want to take care of your mind and your health, you can fast at these times. In Ayurveda, this is considered to be the mastery of all treatments.”

The Farmer’s Almanac write, “Old catfishermen believed the best time to fish was three days before a full Moon to three days after a full Moon.”

Oldtimers in West Virginia tell that there is usually a change in the weather three days before and three days after a new moon.”

The Black Lake, New York Chamber of Commerce website reports: “More than three-fourths of the record gamefish are caught within three days before, three days after, or during a new moon or full moon.”

For centuries, science has attempted to disprove the existence of Magic. But the greater the wisdom of science grows, the more closely it becomes attuned to the magical world.

Moon changed, keeps closet three days as a queen
Ere she is in her prime will any be seen;
If great she appeareth , it showereth out
If small she appeareth, it signifies drought.
—Thomas Tusser, 1848
Thanks to Rich for the Nasa article.
Share this article...
By Lynn Hayes|2019-05-11T07:33:05-04:00April 20th, 2008|Moon, Science|Comments Off on The Moon: Science and Magic