The people around us help us create our reality

The people around us help us create our reality 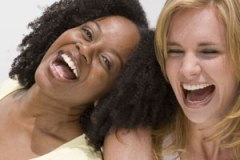 Now there’s even more scientific evidence for what most of us already know:  our friends can make us fat, happy, and sad.

The National Heart Institute has followed more than 15,000 residents of Framingham, Massachusetts and their descendants, giving them comprehensive physicals every four years.  This data has resulted in a treasure trove for medical research.  Recently two social scientists, Nicholas Christakis and James Fowler, began using this data to study behaviors of the participants.  They discovered that good behaviors — like quitting smoking or staying slender or being happy — pass from friend to friend almost as if they were contagious viruses. The Framingham participants, the data suggested, influenced one another’s health just by socializing. And the same was true of bad behaviors — clusters of friends appeared to “infect” each other with obesity, unhappiness and smoking. Staying healthy isn’t just a matter of your genes and your diet, it seems. Good health is also a product, in part, of your sheer proximity to other healthy people. By keeping in close, regular contact with other healthy friends for decades, Eileen and Joseph had quite possibly kept themselves alive and thriving.

“People are connected, and so their health is connected,” Christakis and Fowler concluded when they summarized their findings in a July 2007 article in The New England Journal of Medicine, the first time the prestigious journal published a study of how social networks affect health. Or as Christakis and Fowler put it in “Connected,” their coming book on their findings: “You may not know him personally, but your friend’s husband’s co-worker can make you fat. And your sister’s friend’s boyfriend can make you thin.”

They also found, as other social researchers have, that the number of social connections we maintain improve our chances for happiness.

Christakis and Fowler began to wonder if a person’s connectedness is to some degree fated from birth — a product, at least in part, of DNA. To test the idea, they conducted a study of twins. Using the Add Health school data, they located more than 500 sets of twins and analyzed where they were located in their friendship clusters. Employing statistical techniques traditionally used to parse out how much of twins’ lifestyles are attributable to their genes as opposed to their environment, they found that almost half — 46 percent — of the difference between two twins’ levels of connectedness could be explained by DNA.

46 percent does not appear to be statistically significant.  As astrologers know, the ability of individuals to connect is reflected in their astrological charts.  Twins can be very different because although they have the same charts, the conflicts within the chart are often split between the twins resulting in very different personalities.

In any case, this is more data to support the fact that reality is flexible and that we have more power than we know to mold and shape it as we choose.