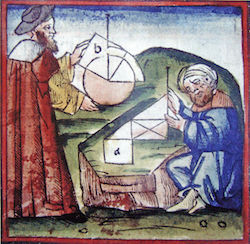 [E]ven though we have been spending all this time with the Greeks, our intention is really to basically to rid ourselves of the burden of the Greeks [emphasis added]. It is very hard to get free of the Greeks. It is very hard to do that scientifically, mathematically, philosophically and also astrolo-gically. The Greeks haunt us. They always have. One might say that the reason they haunt us is that we have never given them a decent burial. Their ghosts are ever present, and even if we don’t know it, Greek principles and Greek thinking are always pulling our strings in ways that we are not always aware of. Our intention is to become aware of how those ancient dead Greeks are in fact pulling our strings.

So we don’t want to simply admire and return to an ancient time. We would like to take the ancient writings, understand them on their own terms, and from their own presuppositions, and get out of them what we can get out of them. And then, bury them so we can be free from them at last. Now this may seem like a somewhat disrespectful attitude. In fact, I think it is the most respectful attitude we can have towards past thought. In order to welcome the future of any discipline we basically have to give the past, or give our ancestors, a decent burial. And if we don’t do that, we will be forever subject to various concepts, various procedures, various ways of thought that the Greeks began that are not necessarily appropriate to our time any longer. So when we study these ancient writings, it is always with an intention to ultimately get free from them [emphasis added].

It’s interesting that the edited version of this lecture on the official Project Hindsight website leaves off these two paragraphs which suggest that the study of the ancient manuscripts is a means to the end and not the end in itself.

The idea that ancient techniques are somehow superior just because they are ancient is a baffling one to me.  While it’s true that the ancient methodologies do offer tools to predict the future, and even death, these tools do not appear to be particularly reliable.  A recent discussion on a Facebook astrologers’ forum suggested that predictive tools couldn’t be expected to be accurate 100% of the time, and that 50% of the time was a pretty good expectation.  To which I replied, if you can’t be accurate, why provide a specific prediction?  How is it helpful to have a very specific tool to predict future events if that tool isn’t reliable?  And while there may be no way to avoid stressful situations during Saturn transits, or drastic change under the influence of Uranus, we still cannot predict with any specificity what will occur at any given time.  Astrology is “archetypally predictive” rather than predictive of specific events.

I’ve been reading this manual of traditional astrology for modern astrologers which has been very interesting.  I am hoping to learn more about these ancient techniques before dismissing them out of hand.  But it can’t be denied all fields of study and practice have evolved as humans evolve through time and astrology must as well.  The problems of the first millenium bce are not the problems of today’s astrology clients which require modern tools and insights.  People have more freedom today than ever before, and along with that comes the power to change our own lives rather than suffer the fate of our ancestors and family karma.  An astrology which reinforces the idea that we are victims of our fate and helpless to change our destiny is not an astrology that I want any part of, personally.