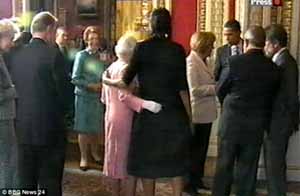 Mrs. Obama’s Mercury is in Capricorn, identifying her as a shrewd and practical thinker with a good head for business.  Mercury is in a harmonious sextile to Venus and possibly her Moon, giving her a skill in communicating and an ability to express herself (Mercury) to others (Venus) in such a way that she is able to make her point without offense.  This is a marvelous aspect for anyone who deals with the public, and certainly would have helped her during her legal and administrative careers.

Mars in Mrs. Obama’s chart is in Aquarius and it appears to be unaspected. Mars represents our drive and desire, and when Mars is unaspected it operates freely without being encumbered by any other planet, and in these cases we see it at its best and at its worst.  Unaspected Mars is not afraid to venture forth where others fear to tread, and we saw this very clearly with President Bush II who also had an unaspected Mars.  For Mrs. Obama, though, the unaspected Mars has probably been very useful since she has a remarkable dearth of hard aspects in her chart.  It is the hard aspects (90 and 180 degree) that energize the chart and create the tension that generates change and evolution.

Uranus and Pluto are conjunct in her chart, as they are for everyone born between 1962 and 1968.  This generation carries the principle of transformational (Pluto) revolutionary change (Uranus) within their individual personality.  This is a group of people that are not willing to let well enough alone – they are out to change the world.  Barack Obama, born in 1961, does not have this Uranus/Pluto revolutionary fervor so Mrs. Obama likely provides the inspiration that fuels his Aquarius ascendant (ruled by Uranus).

Looking at their charts, it’s easy to see the attraction between them.  Sun signs are one of the least important pieces of the compatibility puzzle; Mrs. Obama’s Pisces Venus is exactly (within 1 degree) trine the President’s Venus in Cancer.  Her Aries Jupiter (abundance and positive feelings) is exactly trine his Leo Sun, revealing how good he feels when he’s with her. His Virgo Mars is closely trine her Capricorn Sun, showing the energizing effect he has on her.

Still, as in every good marriage, there are a couple of wrinkles between the charts of the Obamas.  Her Mars opposes his Mercury, and she very likely is often irritated (Mars) at the way he talks to her (Mercury).  Her Venus is square to his Moon, and it’s likely that he finds it difficult to express his true feelings (Moon) to her.  But overall, their interplanetary influences are overwhelmingly positive, and that helps to make for an enduring marriage.