The Rehabilitation of Guy Fawkes

The Rehabilitation of Guy Fawkes 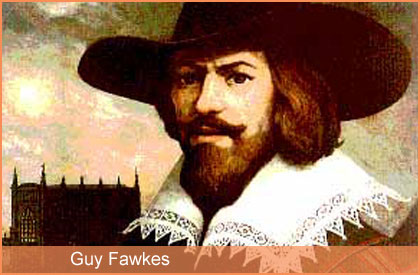 Guy Fawkes day is celebrated on November 5, to mark the foiling of a plot against the Protestant English government that occurred in 1605 and 1606 by a group of conspirators including Mr. Fawkes.  The holiday is celebrated with fireworks and bonfires and the burning in effigy of Guy Fawkes as a symbol of rebellion against the State.  Guy Fawkes was just one of the conspirators, but evidently he is the one that confessed the names of the others under torture.
Oh yes – and coincidentally, the ancient Celtic celebration of Samhain, typically on November 1, is also celebrated with fireworks and bonfires.  What a convenient way for the Protestant hierarchy to disguise the Festival of the Dead from its pagan roots and put a secular spin on the day, using the intense energy of the mid-Scorpio period to bolster pro-government feelings.

The reputation of Guy Fawkes has been rehabilitated over the years, and he is now seen by many as a freedom fighter and was honored as 30 of the 100 Greatest Britons in 2002, just after David Bowie.