The Seven Sisters of the Pleaides

The Seven Sisters of the Pleaides 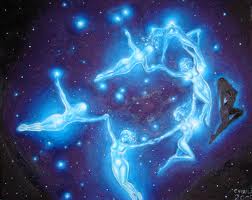 The Seven Sisters are the seven stars in the Pleiades star cluster which is located in the Taurus constellation. In mythology they were daughters of the Titan Atlas. In the myth that I like, Atlas sided with the Titans in their unsuccessful war against the Olympians (and his brothers, the other Titans) and as a result was told by Zeus to stand at the edge of the Earth and hold up the sky. Alternative myths say that he was forced to carry the Earth but there is some debate about that.

With their father Atlas safely out of the way, Orion pursued the seven daughters of Atlas. For their protection, Zeus turned the sisters into doves and then placed them among the stars. After Orion’s death he was placed in the sky next to the Pleaidean sisters.

The Pleaides have been a source of wonder for thousands of years and are connected to the agricultural seasons. They have inspired poets and guided sailors, and many ancient buildings were aligned to collect light from the star cluster including the Parthenon and Mayan temples. More recently they have inspired students of consciousness ascension who view the Pleiadean system as a stargate of multidimensional information.

When Uranus and Neptune conjoined in the early 1990s there was a flood of “channeled” information from beings supposedly in the Pleaidian and Sirian star clusters. Some say the Sirians were bad and Pleaideans good. Some say the Pleaideans were bad and the Sirians more advanced. I personally find channeling of intergalactic beings to be altogether too Neptunian to trust. In addition, dependence on someone who channels information for us limits our own ability to attune to the voice of our higher self and guidance, a voice that can be trusted.