“The stars align to ruin Christmas”

“The stars align to ruin Christmas” 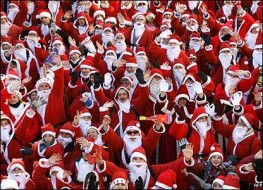 It evidently takes bad astrology news to make the mainstream blogosphere.  The Daily Beast has posted an article that predicts “holiday hell”:

The stars are aligning to ruin Christmas. Astrologers say that for the first time in years, the tumultuous astrological cycle known as Mercury Retrograde falls during the holidays, causing “tears,” “confusion,” and “throwdowns” during the busy shopping and travel season.

This article is largely based on an interview with Susan Miller, who is one of the best known astrologers in the US today and was one of the earlier pioneers of internet astrology with her Astrology Zone on America Online back in the early 1990s.  But in this article she seems to have lost her mind.

It starts with Black Friday and Saturday, which they say will be doomed by bad deals and under-stocked merchandise. And shoppers who wait until after December 9 will get stuck with faulty products or presents that no one wanted in the first place. By mid-December, holiday travelers will be hit with bad weather, mechanical errors and possibly, terrorist threats. Wars may break out, marriages will dissolve, people will lose their jobs and, as astrologer Gahl Sasson put it, “the whole planet is going to have Tourette’s syndrome.” But that’s not even the worst of it. The darkest day comes on the Winter Solstice (December 21), when a full moon eclipse will wreak its own special havoc.

“It’s a nightmare,” says New York astrologerSusan Miller. “People will be in tears.”

I’m in tears already thinking about the effect on humans across the planet whose fear in reading these words will inspire ridiculous behavior that is apt to make this prediction bear fruit.

Mercury turns retrograde for three weeks four times a year, every year.  Often these periods create snafus, but not universally and not as dire as this article suggests.

It’s true that the week around the Solstice eclipse does have its challenges, and with Mercury (short trips, communication) in a challenging square to both Uranus and Jupiter there is a heightened risk of traffic accidents and communication glitches.  The lunar eclipse on the Solstice is a potent one since it tightly conjoins the North Node and Pluto at the 29th degree of Gemini.  I’ll be writing more about this eclipse as we get closer to the event, because this will be a significant time of completion and resolution for many of us.

Yes, it could be intense with that Pluto/North node conjunction to the eclipse.  Yes, Mercury will be retrograde and our attention is turned backwards.  Wars are already breaking out, without the assistance of Pluto or Mercury and we have certainly had our share of planetary bad news this year.

My advice heading into the holiday season is to try to be as conscious as possible, and if you must travel over the holidays expect the usual glitches of Mercury retrograde. No matter who you are with around the Solstice, any hidden conflicts will certainly emerge under this lunar eclipse, so just expect them and learn from their resolution. Astrology is best used as a tool to work through challenging situations, NOT to create more fear in our lives.