After a prolonged “solar minimum,”  with record long periods without sunspots, the Sun has become extremely active again.  These periods of solar maximum alternating with solar minimum are a normal part of solar activity but the last solar minimum was particularly long: 12.4 years rather than the usual 11 years. 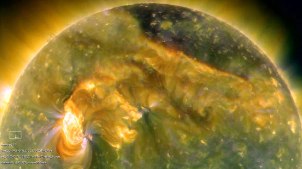 In the meantime, Spaceweather reports that “the entire Earth-facing side of the Sun erupted in a tumult of activity” with a C3-class flare, a solar tsunami, radio bursts, coronal mass ejection (CME) and more.  The impact of the CME hit the Earth’s magnetic field today at 1:30 pm EDT.

It’s interesting (but not necessarily significant) that this burst of solar energy comes when there’s a lot of planetary energy anyway with Mars and Saturn facing off against Jupiter and Uranus.

CMEs can sometimes affect communication satellites and power grids, but this C-class flares typically do not create a lot of problems.  But those in northern latitudes may be treated to some nice auroras!