The Tale of the Antikythera Mechanism

The Tale of the Antikythera Mechanism 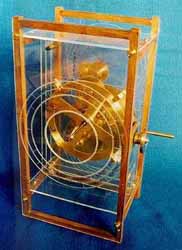 A new video shows a reconstruction of t by museum curator Michael Wright:

The Antikythera Mechanisms is an extremely sophisticated device using a 19-year lunar cycle, which corresponds to the 19-year cycle of the lunar nodes.  New Scientist online magazine weaves an exciting tale of the origins of this incredible device, and notes that when Cicero saw a device like this one, in the first century BC he wrote:

“The invention of Archimedes deserves special admiration because he had thought out a way to represent accurately by a single device for turning the globe those various and divergent movements with their different rates of speed,” he wrote. “The moon was always as many revolutions behind the sun on the bronze contrivance as would agree with the number of days it was behind it in the sky.”

Wikipedia offers an extensive analysis of the Mechanism, including a description of Dr. Wright’s research as shown in this video.  Scientists are unable to account for the advanced astronomical and technological knowledge evident in this computer that is over 2000 years old.  It was well over a thousand years before anything with this complexity appeared again in the Western world.

You may call me a kook, but to me this is one more instance that suggests the existence of an advanced civilization existing in prehistoric times from which a trickle of scientific knowledge filtered down into our own ancient civilizations.  There is considerable evidence of advanced inventions in primitive societies, but these inventions exist in a vacuum without associated technological progress in other areas.  John Seabrook of the New Yorker Magazine writes:

In fact, there is evidence that earlier civilizations were much more technically adept than we imagine they were. As Peter James and Nick Thorpe point out in “Ancient Inventions,” published in 1994, some ancient civilizations were aware of natural electric phenomena and the invisible powers of magnetism (though neither concept was understood). The Greeks had a tradition of great inventors, beginning with Archimedes of Syracuse (c. 287-212 B.C.), who, in addition to his famous planetarium, is believed to have invented a terrible clawed device made up of large hooks, submerged in the sea, and attached by a cable to a terrestrial hoist; the device was capable of lifting the bow of a fully loaded warship into the air and smashing it down on the water–the Greeks reportedly used the weapon during the Roman siege of Syracuse around 212 B.C. Philon of Byzantium (who lived around 200 B.C.) made a spring-driven catapult. Heron of Alexandria (who lived around the first century A.D.) was the most ingenious inventor of all. He described the basic principles of steam power, and is said to have invented a steam-powered device in which escaping steam caused a sphere with two nozzles to rotate. He also made a mechanical slot machine, a water-powered organ, and machinery for temples and theatres, including automatic swinging doors. He is perhaps best remembered for his automatons–simulations of animals and men, cleverly engineered to sing, blow trumpets, and dance, among other lifelike actions.

These mechanical inventions are a long way from the advanced astronomical knowledge and technological subtlety of the Antikythera mechanism.  To me the most logical explanation is the one that scientists consider the most absurd: that this advanced knowledge is an inheritance from the wisdom of an advanced civilization, long ago buried in the mists of time, that pre-existed our Western ones.