The Tea Party and the fall elections

The Tea Party and the fall elections 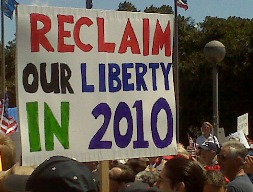 From an astrological viewpoint, the Tea Party movement in the United States is a product of the opposition between Saturn (the establishment) and Uranus (the rebel) that began in the fall of 2008 with the election of Barack Obama.  The Tea Party movement culminated with this summer’s planetary alignments that I’ve been calling the Cardinal Drama because so many planets (a total of seven in June and July) were in Cardinal signs.  Cardinal signs are the sign of action, and they tend to act first and think later.

The big political question has been whether the Tea Party movement, which seems a bit extreme to many Americans, will continue into the fall election cycle.   Most of the big wins by the Tea Party occurred during this summer’s cardinal alignments, where there was a tremendous force for change and realignment of the status quo as Jupiter and Uranus, the two liberation planets aligned and challenged Saturn, the planet of conservatism, and Pluto, the planet of death of one cycle and the rebirth of another.  We see this mirrored in slogans such as the one pictured here.

The Tea Party adherents are conservatives who feel that the GOP has strayed from conservative values and that the party needs to be destroyed and rebuilt (this is reflected by Pluto’s passage through Capricorn, where the structures of our society (Capricorn) are dying so that a rebirth can occur (Pluto)).  The September primaries occurred just as Pluto, which has been at a virtual standstill all month, changed direction and was therefore a planetary focal point.

The big question is whether the revolutionary fervor that began in 2009 and 2010 with the Saturn/Uranus opposition and continued all summer under the intense planetary alignments will continue into November, and it appears to me that astrologically, the energy is not there for this kind of radical behavior to carry through to election day.

In the weeks leading up to that first week in November we see the conjunction of Jupiter and Uranus, which in Aries carried so much force, traveling retrograde in Pisces where the watery element can confuse the issue and make this sort of radical change more startling than compelling.  Saturn travels freely without being restricted by any other planet, which suggests that a focus on reality rather than ideology will prevail.

And while Mars will be in Scorpio in the weeks leading up to the election, creating intense wars (Mars) over the balance of power (Scorpio) and probably a fair amount of dirty politics (Scorpio hates to lose), Mars enters optimistic Sagittarius right before the election.  I am going out on a limb to predict that the election night results will be surprising and cannot be foreseen by anything that happens in the preceding weeks.

Regardless of the outcome of the election, we are in for a revolution of some kind and we will see that fervor return in February when Jupiter enters the combative sign of Aries, followed shortly by revolutionary Uranus.  They will then begin to face off against Pluto, instituting the kind of intense power struggles and radical behavior that we saw in the 1960s.