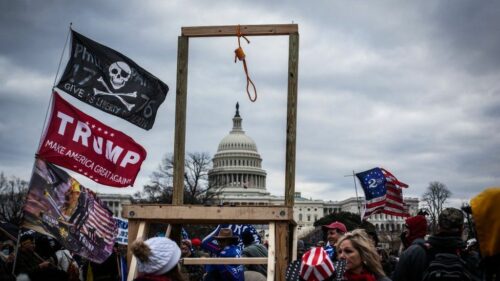 I’ve been writing a lot over the past few years about the return of Pluto to its placement in the US chart which is getting near but will not culminate until 2022-2024.  However, there is another and more insidious planetary aspect at work right now in the US, and that is the opposition (180 deg) aspect between transiting Neptune and US Neptune.  This aspect officially began in May 2021 when transiting Neptune reached the exact degree of the opposition, but the opposition began to tighten back in March and April 2020 when Neptune began its steady approach to the exact degree.

I look at the outer planets as transformational forces; they inspire change that can be rather transpersonal in nature.  At its best, Neptune urges us to transcend the day to day humdrum reality and escape into a more brilliant and beautiful experience, one of inspiration and magic and creative spirituality.  At its worst, this urge for escape and transcendence leads to addiction and delusion. 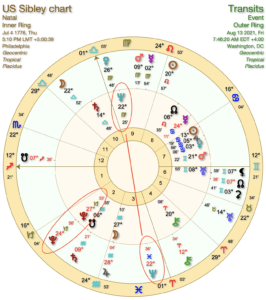 I have readers on all sides of the political spectrum, and it’s a weirdness of the current reality that people on both sides think that those on the other have fallen into delusion.  The deeper we get into this Neptune opposition, the more that will be true and the harder it will be in the US to understand what is true and what is false.  The second exact hit of this transit is coming up August 21, 2021 and although the last exact hit won’t take place until March of 2022, the transit will be in full force as Neptune is hardly moving between now and then.  We are in for a long haul of political confusion leading up to the exact US Pluto return.

Pluto is the planet of transformation via breakdown and reconstruction, among other things, and we are seeing that in the way the political landscaping in the US is unfolding.  Suspicion over elections (Neptune) will lead to the breakdown of confidence and the very stability of the governmental structures will be and are being threatened (Pluto return in Capricorn).

This seems frightening, and it is, but there is a method to the madness of chaos which we can see in the unfolding of the planetary cycles.  Neptune may seem to create confusion, really it just draws out the confusion that already exists – where there is no confusion and delusion we will see the more positive aspects of Neptune instead.  Pluto will not break down structures and entities which are strong and true, but under its influence the weak links are exposed.  As a nation we have survived transits of Pluto and Neptune, but I was unable to find a time when we have had both operating at once.

Still, this is a time of change as we transition from the Age of Pisces to the Aquarian Age.  Change is frightening for many but is inescapable.  The new census revealed that the White population is shrinking which will no doubt exacerbate racial tensions.  Battles over vaccines and masks have become political badges. Fortunately though, for those of us who are given the wisdom of the planetary backdrop it becomes easier to understand the nature of what is happening and apparent chaos is revealed as evolution and continued growth for humanity as a whole.