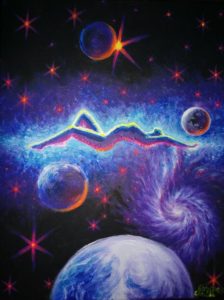 art by Corinazone on Deviant Art

The New Moon in Scorpio is a SuperMoon (™Richard Nolle), meaning that the Moon is at its closest point to earth (perigee).  We usually think of a SuperMoon as being a big full moon in the sky, but a New Moon can also be a SuperMoon, or my favorite, a perigee syzygy.  At these times the Sun, Moon and Earth are in alignment.

The New Moon is often shown as a sliver of a crescent, but it is actually the darkest point of the lunar cycle. The New Moon occurs when the Moon conjoins the Sun and the solar light completely obscures the lunar, leaving us in darkness. But it is in that darkness that the first rays of light can be seen, and in Scorpio, the sign of passion and intensity, we seek the Truth that exists where life and death meet. This New Moon offers us an opportunity to face the darkness and discover our own Truth – to strip ourselves of any falseness and pledge to live in that Truth. New Moons begin a new cycle, and in Scorpio the challenge is to confront our emotional fears without becoming enmeshed in the story.

This New Moon is full of potent planetary alignments to intensify its effect.  The Sun and Moon harmonize in a sextile to the Capricorn stellium (Jupiter, Pluto and Saturn) to aid in the rebuilding of new scaffolding to help support us as we discover new pathways to move forward in stressful times.  The asteroid Pallas is in there too, shining a light of wisdom to guide the way.  Mercury, planet of the mind, is also in Scorpio to aid in deeper thinking and problem solving, and while a stressful opposition to Uranus may create some psychic disturbance it can also help us to shatter old paradigms of thinking which hold us back.

A stressful alignment between Venus in Libra, striving to achieve balance and harmony, and the Capricorn stellium which throws a repeated series of road blocks into our efforts to achieve this integration.  (Venus also opposes Eris, the planet of discord and chaos which suggests that too much going along to get along won’t necessarily lead to peace and cooperation.)   Fortunately, Venus harmonizes in a trine to the North Node – the guiding light which urges us gently but persistently towards our soul’s destiny.  The North Node is the apex of a Yod with the New Moon/Capricorn sextile at its base – a Yod is sometimes called a “finger of fate” or a “finger of God” because there is a gentle but relentless pressure towards the lessons of the apex planet.  Shaped like a slingshot, it operates in a similar fashion to propel us from the base planets (in this case the New Moon sextile the Capricorn planets) to the apex point.  In this case, with the apex point being the North Node, the destination to the journey, this New Moon does indeed hold a powerful key to personal awakening.