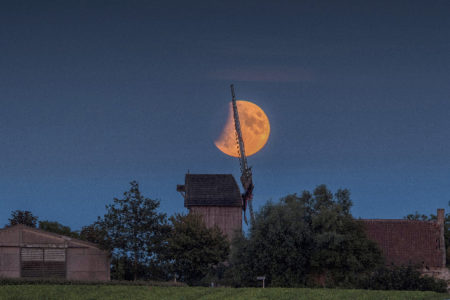 The first eclipse of the summer occurs on June 5th – a lunar eclipse in Sagittarius.  The fear surrounding eclipses has largely abated over time – because an eclipse occurs near the lunar nodes, the points which are associated with fate and destiny, there is a sense with an eclipse that something important is about to happen.  In today’s modern world we have more choices, and are more easily able to create our own destiny rather than fear it.  But there is no doubt that an eclipse is a portal for an awakening of some kind to occur.

Lunar eclipses occur at the Full Moon, when the instincts and emotions prevail over the conscious mind.  In this week’s eclipse, the South Node of the past conjoins the Moon.  In many ways the South Node and the Moon are related – both are tied to events which are familiar and comfortable, and when the Moon is eclipsed our comfort zone begins to shrink as we are pushed by fate into a more solar position of conscious awareness and choice.

Eclipses have long been associated with weather and seismic events, and a lunar eclipse can bring on emotional events of seismic proportions.  Many of us (myself included) meander through our days without being very conscious of how we feel or what is going on in the subconscious.  An eclipse can open up a crack in this veneer of day to day sleepwalking and wake us up to an important realization.  They can be portals of change, but they can also unlock the creatures of the night from their place of hiding and force a realization which may be unpleasant, but which ultimately is important for personal growth and evolution.

This particular eclipse is made more powerful by a series of planetary alignments which are embedded in the eclipse chart.  Probably the loudest voice is that of Mars, which will be at 15 degrees Pisces and in a square formation to the Sun and Moon.  Mars is the planet of aggression and need, and Mars is not only in the watery sign of Pisces right now, but it also conjoins Neptune which is the modern ruler of Pisces.  These configurations hamper the ability of Mars to be direct and assertive in the vigorous manner with which it is most comfortable, which makes conflict resolution more difficult.

The conjunction of Jupiter (philosophy and idealism) to Pluto (power and transformation) is still tightly aligned, as it will be for much of this year.  The fact that this alignment is locked into the eclipse chart suggest that issues of power and ideology will continue to be a major force as the eclipse activates energies which will overcome the natural resistance of humans to change.

In our personal lives this will affect most personally those of us with planets between 10 and 15 degrees of the mutable signs: Gemini, Sagittarius, Pisces and Virgo.  (If you don’t have a copy of your chart, you can obtain one for free at astro-charts.)  This eclipse at the Sagittarius Full Moon asks us to question our beliefs, and asks whether the ideals that form the foundation of our lives still serve us.  The Sagittarius Full Moon yearns to spread our wings and grow, expand, and always be searching for a greater truth. This is the first of three eclipses in a series, including the solar eclipse on June 21st which takes place on the Solstice.  This week’s eclipse opens a doorway for that portal at the Solstice and events that occur this week will create a shift of lasting value.