Thoughts on “Fire the Grid”

Thoughts on “Fire the Grid” 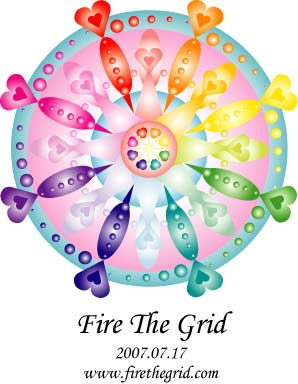 Over the past couple of months I’ve received 10 or 15 emails about “Fire the Grid,” an event occurring today at 11:11 GMT. You won’t be able to access the Fire the Grid website today because of traffic problems, but you can view the video of Shelley Yates sharing her vision.

Shelley Yates is an ordinary person who had an extraordinary experience in which she and her son drowned in a marsh. Before her rescue she experienced the voices and presence of beings of light in attendance, providing guidance that ultimately revived both herself and her son. In the weeks that followed she was given additional instructions that in connecting the power of individuals on earth the damage that humanity had done could be reversed. She was told to connect representatives from every corner of the world in a linkage that would “fire the earth grid” on July 17, 2007, which is today.

The light beings use the term “fire the grid” when they speak of the energizing of humanity with divine power, on July 17, 2007. They say firing the grid will accomplish two things. First, it will pulse healing energy into the center of the earth and regenerate the core, or the heart of the planet. Just as we poured our energy into my dying son, we will individually give the gift of our true intention, the gift of our individuality and the gift of our healing energy. As they explained, my son’s energy field was badly deteriorated, as is the Earth’s. We must pour some of our living energy into the Earth, and the accumulation of our combined energy will regenerate the Earth. They told me humans are like little lightening rods, channelling God’s energy to the planet. Because we have separated ourselves from our complete connection to The Source, by not having a fully functioning human grid, God’s energy has not been able to easily flow into the Earth. If we choose to come together to rebuild our grid, then the natural flow of energy between us and God, God and the Earth, and from person to person, will be restored. Do you see what a wonderful gift you will give? This energy will live on eternally with the earth and its inhabitants; the splendour of the creator’s intention for us realised in the creation of this new energy field for our planet.

How do we do this you ask? The time has been set for July 17, 2007 at 11:11 Greenwich Mean Time. document.write(localTime);— 06:11 (6:11 AM) in Central Time Zone — I have been given no indication about why this date and time have been chosen, but this date has been told to me over and over again. I have been asked to bring together as many humans as possible, throughout the world from every corner of the globe, to simply sit and pray or meditate for one hour during that time. Hopefully, with your help, we will amass a union of humans, such as the world has never seen. Loving humans with one intention – to heal our planet and awaken our souls to our true purpose… to become one with our Source of Light.

I have a hard time believing that the Supreme Consciousness of Creation would have difficulty flowing Its energy into the earth because of the lack of a functioning human grid system. Still, I am a big believer in the power of conscious intention and a linkage of this type can’t help but be a positive expression of intention if nothing else.

It is interesting to me that this event occurs in such close proximity to the Live Earth events which shares a similar purpose of linking humanity in an intention to save the earth. There doesn’t seem to be any astrological significance for this date, although I did find a post linking to my website saying that today is the day that Pluto conjuncts the Galactic Center which isn’t exactly the case, the exact conjunction actually takes place tomorrow, but perhaps it is after all the galactic influence that is inspiring this desire for global linkage, and perhaps there is an opening now for conscious awareness to have a powerful effect. Not just this morning at 11:11 GMT, but every day of our lives.