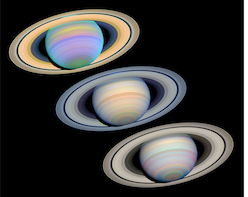 The Saturn returns divide up our lives into ages.  The first 30 years represent childhood and the growing into adulthood. We are exploring who we want to be when we grow up, and take steps to become that person. (There is another crisis point around age 20-21 as well, with both a Saturn and Uranus cycle that sometimes requires a directional shift in our life path.)  At the Saturn return, we are forced to see whether or not we are on a path that serves us and if we are not, that can feel very challenging.  We may have to go back to school, have a child, or care for a loved one who is dying (sometimes Saturn events are beyond our control).  We generally emerge from the first Saturn return stronger and more empowered to take on the responsibilities that are required in order for us to be successful at navigating through the choppy waters of the material world.

After the Saturn return, we begin (or continue) to build the structures of our lives.  We grow our family, we pursue our employment or business goals.  We are climbing the mountain of life in order to achieve our goals. The second return at around age 58-60 marks, for many, the pinnacle of this cycle.  For thousands of years it was rare to even reach the age of 60, much less achieve some sort of major worldly success but now things have changed. Helen Mirren is a sex symbol at age 70. Octogenarians are running marathons.  But typically at the second Saturn return the focus changes.  We may continue to do the work that we have always done, but take it in a different direction.  We may put our Saturnian efforts towards learning an instrument or bodybuilding.  But the quality of our life is different.  We are more aware of our mortality and the passage of time.

All Saturn cycles bring with them the possibility of a life crisis: the death of a parent or spouse or some other person close to us, a health emergency, loss of employment.  But this is not universally true and should not be feared.  Fear of something terrible happening doesn’t prevent it from happening and only causes undue stress. But life is uncertain, and we do never know what is around the corner.  What we CAN say for certain, though is that in the event of a life crisis during a Saturn cycle, the result will  be to strengthen us and impose a new resolve and ability to endure.

I haven’t personally yet done a reading for anyone who has gone through their third Saturn return at around 90. But I have watched the wonderful documentary on HBO called If You’re Not in the Obit, Eat Breakfast.  If you don’t have HBO you can see the panel discussion here. In this documentary Carl Reiner who is 95 talked to his other aged friends about life after 90 and it is a wonderful, inspiring story about maintaining your interest and continuing to live your life.  I imagine that while the third Saturn return probably brings with it the usual Saturnian health problems, deaths of loved ones and other challenges, it may also bring with it a release from the bondage of the cares of life.  At that point, life itself is the miracle and the simple things become a blessing.

After many years of living with Saturn right on my Sun I have come to really appreciate its qualities which can be stern and sometimes seem cruel, but which ultimately help us to be able to steer our way through life with focus and determination.