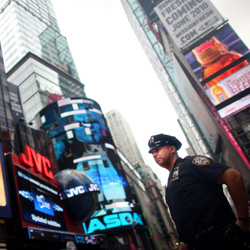 I have been predicting for some time that the focus as Uranus moves into Aries (at the end of May) will shift from terrorist groups like Al Qaeda to the “lone wolves” who are operating primarily at their own instigation and with their own motives.

When an outer planet changes signs or begins a dance with another planet that stimulates a  shift in the energies around us, there is an eruption into the mass consciousness of thought forms that up until that time were isolated incidents.  So recently we had the case of Andrew Joseph Stack flying his plane into an office building housing the IRS, and the Pentagon shooting by John Patrick Bedell.  Both performing terrorist acts but with no connection to any known terrorist groups.

On Saturday night New York police were alerted to smoke coming out of a Nissan Pathfinder and found a failed bomb inside the car.  On May 3 federal agents arrested Faisal Shahzad, a 30-year old Pakistani man who became a citizen in April of 2009.

Shahzad says that he was trained in bomb making in Waziristan in Pakistan, and the ongoing investigation has uncovered links to several other associates of Shahzad.  However, it still does not appear that this bombing is tied to any organized terrorist organization.

The threat of violence from individual extremists is not limited to extremists from Pakistan or other Muslim countries.  There appears to be a growing number of young Americans who are converting to Islam and pursuing an agenda of extremism and vilence.  Last year seven North Carolina men were indicted for conspiring to wage violent jihad.  The FBI has discovered terrorist plots in Dallas, Detroit and Raleigh.  Nidal Malik Hassan was arrested last fall for gunning down 42 people at Fort Hood.

Uranus will begin to align in a square with Pluto this year, but the square won’t culminate until 2011. Uranus/Pluto periods are associated with revolutionary (Uranus) transformation (Pluto) of the status quo, and in this case Uranus in Aries (revolution of the individual) will be challenging Pluto in Capricorn (the destruction of organizations and social structures).  The rebellion of college students came to a feverish peak during the Uranus/Pluto conjunction between 1963 and 1968, and the Students for a Democratic Society (SDS) and the Weathermen were violent factions of this student rebellion that plotted to take over universities around the country.

Under the current Uranus/Pluto square, the dynamic of rebellion is likely to begin once again in the college campuses.  Students, particularly those aged 20-22, are going through a combination of challenging Saturn and Uranus cycles that inspire intense re-evaluation which can result in equally intense rebellious fervor.  Under the current Uranus/Pluto square that challenging cycle will be that much more powerful, especially when Saturn becomes involved.

Most recently Zachary Chesser, a young 20-year old former college student, posted a death threat to Jews and to the creators of “South Park” after the show aired an episode depicting the prophet Muhammed in a bear suit.  Chesser converted to Islam after marrying a Muslim woman in college, and was described by peers as being a “lone wolf.”  He now is head of a small radical Islamist group called Revolution Muslim.

The rebellious fervor is not limited to the United States, nor is it limited to Islamic extremism.  A teenager in Britain was convicted last week of an ultra right wing terror plot to use ricin poison in attacks on Muslims, Jews and blacks.  In Germany, left wing radicals and neo-Nazis routinely beat each other up, with violent crime from these groups rising by over 50%.