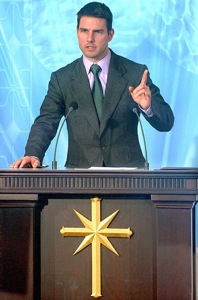 Marty Rathbun was Inspector General of the Religious Technology Center of the Church of Scientology from 1978 until 2004 when he left the church.  Since then he has been a vocal critic of Scientology and offers the services he was trained for to “independent Scientologists” outside of the Church umbrella.

In a classic Mercury retrograde revelation, Rathbun writes on his blog of his recent discovery that David Miscavige, head of the Church of Scientology, used video and audio tapes of the confessional “auditing” sessions made with actor Tom Cruise as entertainment.  Rathbun writes,

I have recently learned from a very reliable witness that DM regularly held court with others in his personal lounge in the roadside Villas at the Int base, and while sipping scotch whiskey at the end of the night, Miscavige would read Tom’s overts and withholds from my reports to others, joking and laughing about the content of Tom’s confessions.  My witness is unimpeachable in my eyes as his account contains too many accurate details from someone who had zero reason (or ability) for being anywhere near Tom’s folders, videos and reports direct to DM.  I also know he was a regular, preferred guest at DM’s scotch night caps during that period.

This is a complex series of planetary cycles that suggest surprising (Uranus) events to expose old wounds (Chiron) to force Cruise to re-evaluate (Saturn) where he is in his life.  Or, through sheer force of will (Jupiter/Pluto in the natal chart) he may continue to pursue the path he is on without looking back .

Tom Cruise has built a foundation for his life around the Church of Scientology, but his natal chart as described in the profile linked above suggests a wound (Chiron) resulting from a pursuit of self-righteous dogmatism (Jupiter/Pluto opposition).  Religion in  any form provides a solid structure that can offer comfort and security, and departure from that security can be frightening and painful.  As humans we always have a choice, and it will be interesting to see how Tom Cruise and the Church of Scientology manage this revelation.