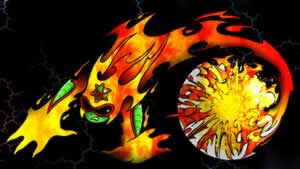 The ancient Chinese, Incas and Hindus viewed the nodes of the moon as the Dragon’s Head (North Node) and the Dragon’s Tail (South Node), and they perceived an eclipse as the Dragon eating the Sun or the Moon.  From the beginning of the use of astrology, somewhere over 2,000 years, eclipses have been used to time significant events.  In a typical year there are two pairs of eclipses, but this year there are an astonishing six, indicating that this is a significant year for change.

The upcoming New Moon is not only an eclipse but also the second New Moon in Cancer (a phenomenon also known as the “Secret Moon.”)   Because Cancer rules the Moon, it is particularly powerful in Cancer and because this is an eclipse of the Sun, the lunar influence is even more powerful.  The Moon presides over all issues of emotion, but also our emotional connections to each other and to our ancestral history.  Cancer is known for its concern with family matters but that sense of family extends beyond the nuclear family, and even the extended family, to the entire tribe of which we are a part.  Some of us have strong family ties; others of us create our own tribes that serve the family role.

Because of the intensity of the triple conjunction of Jupiter, Chiron and Neptune which is still tighly in alignment, many of us are more sensitive and more highly reactive than usual. Under the eclipse the influence of the solar conscious mind is diminished, and the emotional power of the Moon stands raw and undiluted.  The Triple Conjunction is already stripping away the veneer that we have built to protect us from ourselves; the eclipse may accelerate the process of unmasking the vulnerability (Moon/Cancer) that reveals our true heart.

The first New Moon in Cancer occurred in June on the day following the Summer Solstice which added its own bit of drama. This New Moon is at the 29th degree of Cancer, within two degrees of the North Node. The 29th degree is sometimes called the “critical degree,” and there is a sense of something coming to a close, of needing completion. The New Moon, when the Sun and Moon conjunct, is typically a time of new beginnings; however, here we have something new beginning and closure occurring at the same time. The Sun is on the cusp of Leo, so the fresh new start is already in place – we have only to turn our view so that we are looking forward again and we will be in motion.

The New Moon is trined by Uranus, the planet of radical change and surprise, suggesting that the new wave of evolution will not be what we are expecting.  Uranus demands that we let go of any rigid ideas that we have and open up to the intuition of the higher mind.  A harmonious sextile of Mercury to Mars is embedded in the New Moon as well, helping to sharpen our focus and provide us with the mental energy we need to get through any difficulty we encounter in our day.

Relationships may be under some pressure with a square of Venus (relating and beauty) to Saturn (disappointment and restriction), and we may find that this is a time that the soul prefers solitude to companionship.  This is a time when we are pulled deep within ourselves and the presence of others in our lives may create pressure with the Saturn/Venus influence.  On the other hand, Saturn inspires us to greater loyalty and commitment so it is possible now through the hard work that is required of a Saturn square, a challenging aspect, to strengthen our relationships based on the Truth that is emerging from within.

The effect of the eclipse will be most powerful for those who are currently undergoing transits to their chart from the Triple Conjunction, or who have planets in the very last degrees of the Cardinal signs (Cancer, Capricorn, Aries and Libra).  The eclipse is also most powerful in the areas where it can be seen, which in this case includes central India including Mumbai and Bhopal; Nepal, Bhutan, Shanghai, and the islands south of Japan.