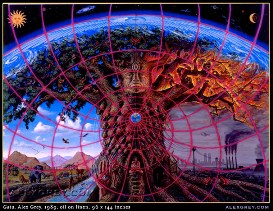 These are aspects of my current view of the world: the faltering of my faith, that horrible presentiment that the forces of disillusion and destruction have already triumphed, that creepy familiar feeling (as if I already experienced this, long ago, on some other lost world, many forgotten splinters of incarnated lifetimes ago) of failure and futility. On another level, I feel an equally uncanny presentiment that all of this is still going perfectly according to plan, that the script of our collective world movie/space oddysey has to unscroll or unfurl in just this stomach-clenching way, toward its still mysterious denouement. Observing my own life, I see that it often takes a drastic crisis to spur me into action – perhaps that is the only way change ever takes place, on the individual or species level.

The environmental and economic meltdown could clear away all the obstacles and obstructions that keep us from attaining clarity, from putting into practice what we know intuitively to be true. Is it possible that the Jungian archetypal Self – the increasingly humanized god-image that seeks to incarnate in our human world – must bring about the complete breakdown of what is known and familiar, to open the space for what can only be revealed, in the fullness – and emptiness – of time? Perhaps we can only reach the depth dimensions of our higher being through an unfolding mega-crash that exposes all levels of delusion and self-deception, that forces those of us who desire illumination to break all the bonds, the “mind-forg’d manacles,” that keep us from attaining liberation. …

It is now agonizingly obvious that humans do not change their ways until they are far outside of their comfort zone. It is only at the point of death that transmutation becomes possible. Perhaps the rampant desecration of the physical world is going to force the more conscious subset of humanity to purify their intentions, clearing cobwebs from the shadowy corners of the psyche, to access extrasensory capacities on a regular basis. Many of us have experiences of this energy, this potential, but the manifestations tend to occur at uncontrollable junctures and in mysterious ways. In my own life, I have found that psychically charged events occur at certain highly charged junctures, which seem to reveal the working of a synchronic order, as if some form of superconsciousness, when magnetized by the energy of intention, can ripple through the underpinnings of our 3-D reality, causing changes that seem beyond the parameters of what we generally accept as possible. Can we learn to access these capacities on a regular basis, like the dependable current we get from electricity? If we can come into alignment with this superconscious shaping force, we may be able to begin to heal the wounds of Gaia, to stop tormenting the generative earth that shelters us and gives us life. I think it is quite possible that even the course of seemingly unstoppable biospheric and geophysical events, like climate change or the oil spill, could be altered through collective psychic effort, much as indigenous groups like the Hopi used initiatory ritual and trance dances to bring rain down from the sky.

I pray this is the universe’s wager for us: that we will go beyond our current ruts and limitations, that we will manifest a future of imaginative joy by stepping into our potential, becoming the wizards, warriors, and initiates that the world needs so desperately now. As Nietzsche pointed out accurately, “man”, in his current form, can only be a transitional creature. Either we are rapidly approaching the terminus point for our species or we can collectively choose to transmute, creating an evolutionary implosion, from the physical to the psychic realm. As the oil gushes forth and the earth’s resources disappear, it may be that we can learn to thrive on subtler and far more powerful forms of energy. Working together, we can guide the world toward its next phase of being – a plateau of intensified consciousness and synchronic coherence, in which conscious evolution becomes both sacred game and participatory art form.

I see this less as a test from the Universe as a natural unfolding of the flow of life.  Many of my friends are lost in despair over the dramatic loss of life and corruption of nature that we are seeing in the Gulf today, but in focusing on that we miss the point.  The point is to allow the rage that fills our hearts with hate instead to energize us to fight for change.

This is what occurred in the 1960s when Uranus conjoined Pluto, and rage over the Vietnam war spilled over into a creative and exciting movement to transform every aspect of human life.  In the coming years, as Uranus forms a square to Pluto, that creative energy is once again available to us.  Rather than sink into a lethargy of melanchology over the events that we cannot control, adjusting our focus and activating our consciousness can begin to make huge changes, even if they begin in small ways.