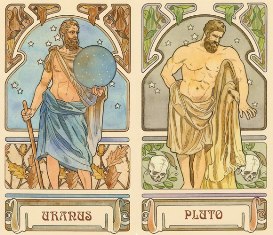 Today marks the fourth phase in the dynamic square (90 degree) alignment between Uranus in Aries and Pluto in Capricorn.  The conflict between individual self-expression (Uranus in Aries) and the power establishment and need for control (Pluto in Capricorn) has been seen in virtually every area of our personal lives as well as the landscape of the world political arena.  (See the sidebar for all dates)

Although the first exact event took place in June of 2012, Uranus and Pluto came within just a few degrees of exactitude back in 2011 so this dance has really been going on for over two years during which time we can see the Uranus/Pluto conflict of revolution and power imbalance played out in the news:

And we’re just in the middle of the cycle.  One thing is clear: this Uranus Pluto square is having the effect of breaking through patterns of negativity and repression in order to awaken the sleeping urge for liberation and freedom.

Today’s Uranus/Pluto square #4 is supported by harmonious aspects which will help to facilitate the surrender and letting go that is required before the new energy can effect transformation and liberate us from the ideas and patterns that hold us back.  The Sun harmonizes with Chiron and Pluto today, illuminating the power of healing (Chiron) energy that softens hard edges, and assisting in the process of elimination (Pluto) that is required when old ways of thought and feeling must die away.

The Sun and Mercury conjoin today, and while traditional astrologers called this “combust” and believed that the Sun weakened the influence of Mercury I have not seen this to be true.  The light of the Sun opens up our eyes so that we can see and think (Mercury) more clearly  – our ability to understand is quickened and enhanced by the light of the Sun.

This will help prepare us for the Scorpio eclipse coming up in a few days.  Stay tuned!