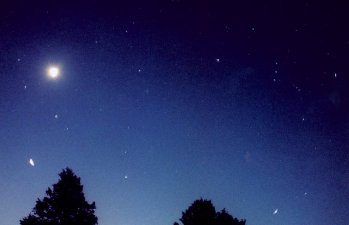 Many many years ago, back in the mists of antiquity, ancient astronomers thought that Venus was actually two separate bodies, one called Phosphoros, “The bringer of light” also known as Lucifer or the Morning Star; the other they called Hesperos, the Evening Star.

From our perspective on earth, the orbit of Venus is always fairly close to the Sun.  When Venus is at her brightest she  becomes visible just after the Sun goes down, and is then called the Evening Star.

This week Venus reappears as the Evening Star, in the sign of her exaltation (Pisces) and conjunct magnificent Jupiter. I would expect nothing less, as she’s been kicking ass during her recent underworld journey (which began just as Tiger Wood’s furious wife took a golf club to the cheater’s SUV). In my Oregon town (often called “land of a thousand goddesses” for its many bright and talented single women), a sudden string of sexual attacks brought out angry marches, attended by both women and men. Here in Ashland, Venus was not trembling in fear. From many of the Super Bowl ads it seems that men may be the ones trembling today, hoping to reclaim their grunting authority from the powerful Venuses in their lives (or maybe that was just the retrograde Mars). At the Grammys, Venus divas dominated: Beyonce, Lady Gaga, Pink and Taylor Swift, all reminding us how much fun it is to be a girl. We’re halfway through this current Venus cycle and it’s worth recalling how it began: when Venus emerged as the Morning Star, so did the breakout popularity of Susan Boyle, who showed us that even a middle-aged Venus in a frumpy dress can be a diva. Boyle’s song was “I dreamed a dream.” Now as an exalted Venus rises with the sky god Jupiter, it is perhaps time to live our dreams too.

Venus and Jupiter have already begun their dance, just in time for Valentine’s day, and will conjoin exactly on February 16th.  This combination will be a beautiful sight to see, and is auspicious for for love and prosperity, as well as creativity and spiritual magnificence.