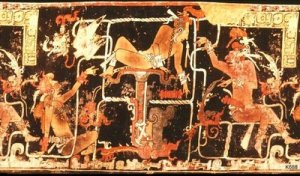 Venus is the goddess of love and pleasure, and she rules over the principle of attraction as well. In that guise she oversees our ability to accumulate wealth and talents as well as loved ones, and it’s therefore not surprising that since Venus turned retrograde the financial markets have improved and there is a bit of optimism lurking underneath the darkness.

Venus is at its brightest just before it turns retrograde, but it is during the time when it makes a station as it prepares to turn direct that it slips into darkness. During this retrograde period that time will come around the 15th of April.  According to Bruce Scofield as quoted by Erin Sullivan in her excellent book Retrograde Planets: Traversing the Inner Landscape, the ancient Mesoamerican cultures believed that Venus “takes the form of a man and walks the Earth.  Here he meets the goddess Xochiquetzal, goddess of love, who abets him in breaking his vows of purity.”  Venus couples with the goddess and is sacrificed when the planet Venus is hidden from view, only to be reborn as the Morning Star and back in her female guise.

This pageant reflects the fact that when Venus is retrograde we often are forced to view that which is hidden and dark within us and in our relationships.  The Mayans evidently used the astronomical movements of Venus to plan their wars and sacrifices at the time that Venus emerged from the underworld.  This celebration of Venus as Goddess of War would exalt Venus in Aries, the sign ruled by Mars, god of war, rather than refer to Venus in Aries as being in her detriment.  Is this a symbol of our sanitized culture which even from an astrological point of view prefers the cartoon character Venus Aphrodite, emerging as a sex goddess from the sea, to the raw and brutal Mayan vision of Venus, “still sticky with the blood and bones of the dead after her forty-day journey in the arms of the Sun.” (Sullivan, Retrograde Planets).

As a culture we are learning to reframe our values during this Venus retrograde period.  The stress of the financial crisis has caused many people to re-evaluate their lives now that they are out of work, and some are finding that there are some benefits.  What do we value, and who are we really underneath the veneer that we present to the world?  This is what is being asked of us now.