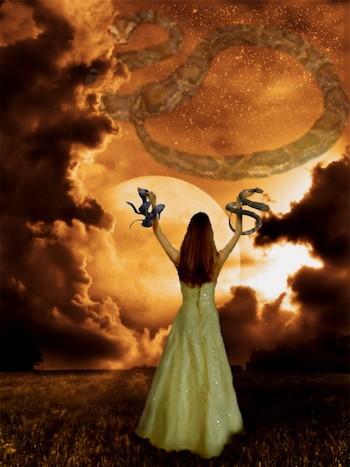 Deviant Art.  Venus turns retrograde on October 5th and will be retrograde until November 16th, 2018.

Venus usually slips through our lives like a whisper, and we barely experience her fleeting transits. Her influence is usually soft and encouraging and I often say that we only really take notice when we experience discomfort of some kind. Even the challenging transits of Venus are benign, offering us only an opportunity to indulge in greater indulgence.  When Venus is retrograde, however, she moves more slowly and deliberately and her influence is therefore more powerful.  Planets are said to be traveling in retrograde motion when they appear to move backwards from our perspective on earth. During these times their influence causes us to look back instead of forward as we encounter the experiences of that planet.

Venus is famous for her influence on relationships. As the goddess of love and beauty, she bestows an attractive power and grace, but that attractive power draws more than love. It can also a magnet for financial wealth and personal possessions so in that way, Venus is said to rule our values and the things that we love as well as the people. Venus also rules our ability to love and relate to our self, and the kind of talents and personal resources that we possess as well as the material possessions.

Venus only turns retrograde every 18 months or so.  These are excellent times to reconnect with friends or loved ones from the past, or to repair relationships that have suffered.  These are not always the best times to begin new relationships, but that doesn’t mean you should shy away from meeting new people.  Often when Venus is retrograde we can learn a great deal about ourselves through our interactions with others because of the introspection that the retrograde provides.

During this current Venus retrograde cycle, Venus is in Scorpio where she is powerful and intense.  This is not the cartoon Venus of love and superficiality – in Scorpio, Venus demands nothing less than truth and full equality.  In ancient times, the earlier Venus archetype (such as Inanna and Ishtar) was a powerful goddess who represented not only love and beauty but also war and sexuality, both ruled by Mars.  In Mars-ruled Scorpio, Venus takes on her ancient attributes and empowers us to go after that which we seek, and to experience our relationships in new and deeper ways.

While retrograde, Venus will form a challenging square to Mars (planet of war and aggression) which will exacerbate the Martian qualities of this Scorpio Venus.  This alignment will be in effect between October 5th and the 14th or so, and towards the end of the cycle the Black Moon Lilith, which acts a bit like Scorpio Venus on steroids in terms of female power, will align with Mars to square Venus.  This period coincides with the end of the Brett Kavanaugh confirmation process so things are likely to become even more intense.

Venus will retrograde past the Sun on October 26th which is an important part of the retrograde cycle when Venus becomes a morning star as she is reborn from the Underworld of her role as evening star.  Between the 29th of October and the 1st of November of so she will be opposite Uranus, the paradigm-busting planet of change which is virtually stationary right now at 0 degrees Taurus, so expect disruptions in relationships or other areas of our lives that have become stale or dysfunctional. Prepare for change where change is needed, as this is a bit of a tornado of energies to shake up and excite our lives in a variety of ways.   Between November 8th and 25th Venus comes to a standstill as she changes direction to turn direct, still in a strong aspect to life-changing Uranus.

This Venus retrograde asks us to examine the shadow side of our personality and of our very soul.  As Venus moves from evening star where much is hidden to morning star, our own truths can be revealed.  Often we hide from our shadow, hoping that it will disappear or be subsumed in light but this rarely happens.  Instead that shadow lingers in the darkness of our unconscious, revealing itself at inopportune moments when we least expect it and causing damage to our emotional lives.  During this Venus Retrograde cycle in Scorpio, with that strong aspect to the revolutionary force of Uranus, we can release the bonds of our painful shadow and emerge, like Venus, reborn into a new clarity and empowerment.

Venus retrograde periods are wonderful times to surround yourself with beauty.  Beautiful energies, music, art, and artifacts help to enhance the spirit and open the heart.  Venus encourages us to find joy in beauty and a sense of peace and harmony through beautifying our surroundings.  Venus retrograde periods can help women to embody our strong and divine feminine powers, and aid men in connecting with their own powerful feminine allies.