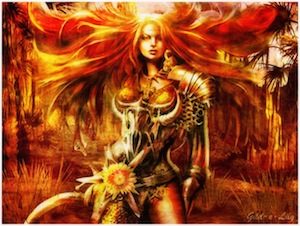 This article was originally published in 2012. I am not certain where this art came from originally, but I found it here.

As many of you know, I have a special interest in energy imbalances and health as shown in the birthchart.  Disclaimer:  I have no medical training and any medical information that appears in this blog contains only my own hypothetical beliefs and should not in any way be construed as medical advice. When there is an immune system disorder of some sort, such as Multiple Sclerosis, fibromyalgia, chronic fatigue symdrome, and other similar ailments I nearly always see what I call a “fire problem” in the chart.

Fire is the element of action and initiation – it creates the drive and ambition that inspires us and stimulates desire and need.  When a chart lacks the fire element, or if there is a strong Mars that is afflicted by a challenging aspect from Neptune, Saturn or Pluto without other supporting factors, the  fire energy is more difficult to express and can back up into energetic blocks in the body.  You can read more about that in this earlier post.

The other day I did a reading for a client who has Multiple Sclerosis.  Her chart showed Mars in Leo – a powerfully expressive Mars that demands attention and enthusiasm – but it was opposed by Neptune, the planet of subjugation and transcendence.  She had no other fire in her chart, and she had a great deal of difficulty expressing her needs (Mars in Leo) or dealing with any feelings of anger when her boundaries were violated.  After her MS diagnosis she found she could use that fact to assert herself more strongly into the world.  Now when people tried to get her to do things she didn’t want to do, she could say “I can’t, I have MS.”  The human mind/body system is an amazing thing.

When we discussed the Mars connection, she told me about a website called MASHNorth (Metaphysical And Spiritual Healing) that included information on a metaphysical approach to ALS. ALS (also known as Lou Gehrig’s disease) is related to MS in that both are neurological disorders, but in MS the immune system attacks the myelin sheathing on the nerves whereas in ALS  the motor neurons disintegrate with no apparent cause.  My Mars hypothesis is limited right now to immune system disorders, but the ideas in this website are interesting because they too deal with the warrior archetype (Mars was the god of war, and Mars does rule warfare, anger and rage):

We are proposing that prior group warrior memories are one environmental trigger of ALS, and that the warrior archetype of devoted physical action (as in soldiers, athletes, nurses, police and fire people) is associated with ALS, just as the Type A personality is associated with heart dis-ease.  [See the details here.]

Studies have shown that military veterans are twice as likely to contract ALS, and athletes (such as Lou Gehrig, for whom the disease is named) also have a higher than normal incidence of the disease.  This has led some to hypothesize that brain trauma could explain the higher incidence among these groups.  However, both of these groups share this “warrior energy” which astrologers term as “Mars,” and the MASHNorth site suggests:

The stronger the vow and the attachment to a prior group warrior experience, the more the “top gun team warrior-ness” as in Lou Gehrig, Jimmy “Catfish” Hunter, top gun Gulf War veteran Major Michael Donnelly and the professional athletes. In terms of ALS, an intense warrior vow, as the scientific studies show, manifests as an elevated rate of ALS in warriors that is “dose related” and that occurs as an early onset.

I thought I’d take a look at Lou Gehrig’s chart, and sure enough we see the Moon in Aries, Mars’s own sign, opposite Mars in Libra.  The Moon in Aries has a strong primal need to be a warrior: to be strong and assertive and think for oneself.  Mars is said to be in its detriment in Libra because the drive (Mars) is for peace and harmony whether than assertion of the aggressive force.  Mars is squared by Neptune, the planet of transcendence and spirituality.  Neptune is a beautiful planet for creativity, art and meditation, but it is not very helpful for Martian enterprise.  This chart has fire problems, and when you combine the conjunction of the Gemini Sun to Pluto, it’s clear that Lou Gehrig was going to have experiences that challenged him and forced him to deconstruct (Pluto) himself (Sun) to rebuild and transform.

Richard Pryor, a famous MS patient, has Mars in Scorpio, the other sign that is (traditionally) ruled by Mars.  He has the Sun in Sagittarius, a fire sign, so the fire element is strong in his chart, but Pisces is rising and that Scorpio Mars, which can be quite intense in its need to project, is opposed by both Jupiter which expands it, and Saturn which oppresses it. (Here is another article about the astrology of MS.)

One of the cures for Mars problems is self-assertion and physical activity.  In order for Mars to be properly expressed and find balance in the energetic system, it must be able to follow its path and accomplish its goals of achieving one’s individual needs and activating the energetic force.  When this cannot be accomplished, it is my hypothesis and belief that the energetic force of Mars turns inward and is translated by the body into immune system disorders.

Note:  There is growing evidence that exposure to glyphosate (the active ingredient in Roundup and other weed killers) is a factor in neurological diseases such as ALS, Parkinson’s, MS and even Alzheimers.  But that does not negate the astrological/energetic connection which I believe can explain why some individuals are more susceptible to certain health issues than others with the same exposure.