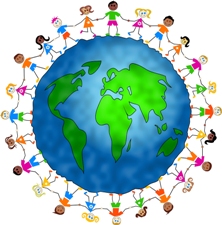 For some time now I have wanted to do an analysis of the outer planet cycles to see how they affect global periods of transformation so I was glad to see this article by Dharmaruci in which he discusses the fact that the current cycle of Uranus in Aries in a square to Pluto in Capricorn is part of a larger cycle in which all three outer planets (Uranus, Neptune and Pluto) are in the waxing phase of their relationships to one another.

The outer planets represent transformational forces – their influence goes beyond the personal limits of our individual lives, so it makes sense that the interactions between the outer planets create forces that often feel as though they are beyond our control.  But they also serve the purpose of pushing us beyond our comfort zones so that we are forced to develop and progress – as individuals, as collectives, and as nations.

The period between 965 and 1029 CE witnessed the flowering of Arabic civilization, and the next period of waxing phases, from 1479-1538, was marked by a push for exploration beyond Europe into new lands.  DR notes that our current waxing phase began in 1993 and will continue until 2046 – a long period during which we will undergo many changes and transformative pressures.

The West has dominated world culture and finance for centuries, and in the mid-1990s, as this waxing phase began, the balance of power began to shift.  Some of this was due astrologically to Pluto entering Sagittarius in 1995, inspiring an expansive view of globalization (both Sagittarius keywords) that resulted in the transporting of American jobs overseas.  This period also began a tremendous period of immigration across the globe which is forever altering the identity of individual nations.

DR shares my view that the end result of this has been a growing middle class in Asia as the middle class in the US and Britain have dwindled.  Just as in these other waxing phases, the base of power in the world has shifted and this is likely to ultimately create greater expansion of knowledge and economic balance in the long run, even though it’s painful for Western countries at the moment.