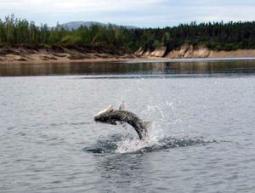 Well, maybe not astrology, but this article about fishing confirms that fish and wildlife respond to the cycles of the Moon:

What is generally known and almost universally accepted is that fish and game are more active at certain times of the day, most noticeably at dawn and dusk. It is also generally agreed that many game species are more active during certain phases of the moon as well as when the moon is in certain positions in the sky each day. All of these influences have an individual effect that can be observed and in some instances measured.

Much of the early research and understanding of solar and lunar influences was pioneered by John Alden Knight. In 1926 Knight began his studies of various influences that affect wildlife activity. This research resulted in his publication of tables that illustrated periods in each day of major activity and minor activity. To substantiate his research and theory, Knight analyzed data for over 200 record catches of fish. His analysis concluded that 90% of the catches were made while in the effect of the new moon and while in a “solunar period”.

Read more here… A “solunar period” takes into account the position of the Sun in the sky and its relation to the Moon, as well as the lunar phases (which, by the way, are defined by the relationship between the Sun and the Moon at any given time).

A little googling results in a cottage industry of solunar tables as an aid to fishermen and hunters.  Knight’s research was confirmed by Dr. Frank A. Brown in 1954 in the famous oyster experiment that astrologers like to use as an example of the effect of celestial forces on the natural world.  In this experiment, oysters were flown from the coast to Dr. Brown’s lab in Chicago and after a few days of confusion, began opening and closing in accordance with the lunar phases present in Chicago rather than their home on the coast.