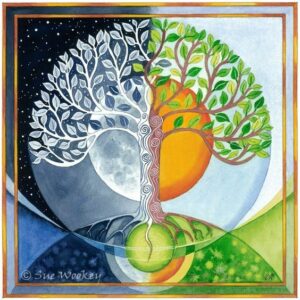 With the Sun entering the sign of Aries at 5:37 am, the season of Spring has officially begun in the northern hemisphere.  On this day, the light and dark have achieved equal status: day and night are in balance.  Aries is the first sign in the zodiac and as such it is the sign of initiation and the point of beginning.  There is a burst of energy at the Aries point: an unbridled explosion of pure potential and action, and this is the energy that we are experiencing when we talk about “Spring Fever.”

The return of the ascendancy of the light has been celebrated for millenia, and the pagan celebrations of old became the spring celebrations of our major religions.  The Jewish festival of Passover is timed to the first Full Moon after the spring Equinox (the Paschal Full Moon), and Easter is celebrated the first Sunday after the Full Moon.  The idea of resurrection and freedom are a thread that runs through all of the celebrations at the spring Equinox which is essentially a Northern hemisphere holiday (in the Southern hemisphere of course this is the first day of autumn).

Aries season is beginning to build, and on Sunday Venus enters Aries at 10:16 am at which point there will be four planets including Chiron and Ceres, Sun and Venus in Aries.  The fire is emerging to energize and fuel a new beginning, a resurrection from the dark and an opportunity to shed the old skins of winter and open up a new chapter in the story of our lives. ❤️