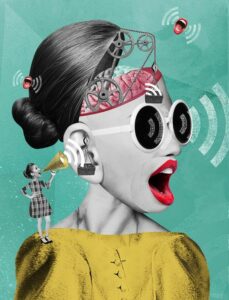 The planet Mercury rules the weekend, interacting with Jupiter, Mars, and then conjoining the Sun at 29 degrees before moving into Taurus early on Monday morning.  Mercury’s domain is the transmission of information, messaging, thought process, and the digestion of experiences into our conscious thought. Mercury has been in fiery Aries for the past few weeks, generating swift reactions and inspiring action.

Currently there are five planetary bodies at 25-27 degrees of a sign: we have the Sun at 27-28 degrees Aries, Mercury at 25-27 Aries, Mars at 26 Gemini, Jupiter at 26 Aquarius, and Pluto at 26 Capricorn.  That means that all of these planets are interacting in one form or another, stimulating greater energies both positive and negative.

The Moon is right in the middle of the fray as it finishes up its passage through the last degrees of Gemini.  Because Gemini is ruled by Mercury, that adds another layer of mental focus and ensures that this will be a weekend full of ideas and thoughts and perhaps new experiences that teach us new lessons.  The Moon will move into Cancer at 3:25 pm EDT/7:25 pm GMT and shift these mental energies into the realm of feeling.

On Sunday, Mercury conjoins the Sun – the superior conjunction, when Mercury is closest to the Sun and farthest from Earth. Mercury’s orbital speed is at its fastest right now, and will begin to decline as we get closer to the retrograde period.  The conjunction of Mercury to the Sun is thought by some astrologers to be a negative event where the Sun literally burns up the energies of Mercury but that has not been my experience.  During the Mercury/Sun conjunction, especially the superior conjunction when Mercury is traveling direct, the mind is like a laser beam of powerful mental energy and focus.  This is the perfect time to use your thoughts to create a new direction, or a new intention for something that is already underway.  That does mean, of course, that we have to be more careful about where our thoughts take us to avoid being carried in the wrong direction! ❤️

When Mercury is retrograde we often