Weekend update: April 24, 2021. Scorpio SuperMoon energies and the power of Mercury as messenger

Weekend update: April 24, 2021. Scorpio SuperMoon energies and the power of Mercury as messenger 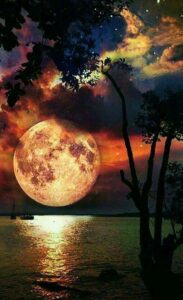 The big news this weekend is the Scorpio Full Moon, a Supermoon (© Richard Nolle) which technically occurs on Monday night (early Tuesday morning GMT) – the lunar energies will be building throughout the weekend before reaching its culmination at 11:30 pm EDT.  Until Mars entered Cancer today there was a lack of the water element in the skies – we have lots of Aquarian air of the intellect, and some Taurus earthy grounding energies, but the watery energies of feeling and emotion have not had an easy conduit through which to flow.  The Scorpio Full Moon will change all that: Scorpio is the sign of intensity and passion, the impulse that pulls us into the deepest part of our soul and forces us to experience life in the most profound way possible.

All Full Moons are formed by a polarity between the Sun in one sign balanced against the Moon in the opposite sign. Each opposing pair is a cycle of energy that flows from one sign to the other, each sign containing what the other lacks. Scorpio and Taurus are both fixed signs, both are highly personal signs with one being ruled by Mars (Scorpio) and one by Venus (Taurus). Both are concerned with matters of earthly life, but in Taurus we hold on to who we are, and in Scorpio we must let go of who we think we are in order to become transformed in the purging fire. Taurus seeks harmony and serenity, and Scorpio seeks passion and drama.  The SuperMoon occurs when the Moon is at its closest point to Earth – the Moon appears bigger than usual in the sky, and the qualities of the lunar influence intensifies – higher tides, heightened emotions, etc.

At the Scorpio Full Moon we find every aspect of our being intensified under Scorpio as the Taurus Sun encourages us to ground into the earth and find pleasure in simplicity. There is a stellium in Taurus right now – a grouping of planets (Sun, Uranus, Mercury and Venus) all within eight degrees of arc – a tight focus of Taurean stubbornness and strength that will oppose the Scorpio Full Moon, intensifying the natural tension between these two fixed signs which arguably are the most powerful of all of the zodiacal signs.  The Moon will form a harmonious trine to Mars at the Full Moon which is significant because Mars is the ruler of the Scorpio Full Moon and therefore a great ally.  Mars provides the courage required in order to face that great landscape of the subconscious through which we travel at the Scorpio Full Moon.  This is not a time for superficial niceties – here we go deep into the hard truths and in the process we discover more about the nature of life itself.

These energies begin to build on Saturday and with the Moon in Libra for much of the weekend we may find ourselves struggling to find our footing with Libra striving for balance and a sense of peaceful harmony.  Venus is one of the planets in Taurus and the yearning for greater serenity runs deep, but Venus squares Saturn in Aquarius very early Sunday morning EDT/later morning GMT which could make relationships and personal interactions more difficult.  There may be more of a need to pull into ourselves as we process all of these energies which compete for our attention.

Meanwhile Mercury, the messenger god, will “translate” the square from Saturn to Uranus – the planetary alignment that more than any other defines the astrology of 2021.  Saturn is associated with tradition and structures; Uranus is the disrupter and rebel.  Civil unrest, conflicting ideals, the need for change – all themes of 2021, and while Saturn and Uranus are technically not in an exact alignment at the moment, they are just two degrees apart and this influence is still strong and will remain so until June and July when they will begin to separate a bit more.  In any case, Mercury conjoined Uranus very early in the morning on Saturday (before this article was posted) and will form a square to Saturn early on Sunday morning, thereby linking Saturn and Uranus by association and heightening the intensity of their conflict.  This effect is rather like when you have two children who are having a fight and you put them in different corners of a room, and then another child comes in and taunts them!  So watch for sharp words to fly over the weekend, arguments perhaps, and a struggle between old established ideas and the pressure for change that comes when the old ways no longer fit our current life. ❤️