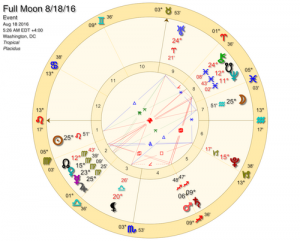 The Aquarius influence continues to enhance our intuition and raise our vibration so that we may more easily move through the small events of our life without becoming stuck in detours that take us off the path.  With Venus aspecting the Lunar Nodes, this Full Moon is full of creativity and the potential to open our hearts .