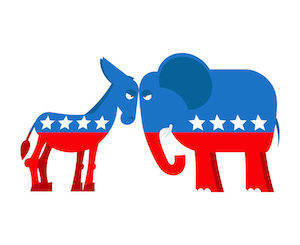 I have been writing this blog for a long time – since November 2005 to be exact.  During this time I’ve written over 2500 posts, and quite a few have been political in nature.  One of the things I enjoy exploring in these pages is how current astrological cycles affect humans on earth, and since politics is one big way that humans interact with each other it naturally seems to have a place in this commentary.

However, quite a few of my readers feel that there is no place for politics and astrology.  This reminds me of the late 1960s and the early 1970s when a conflict between the burgeoning spirituality movement collided with the burgeoning revolutionary movements, leading to the catchphrase “the personal IS political.”  Coincidentally (?), that time period was similar to the current one in that it followed a cycle of Uranus/Pluto and the associated revolution and upheaval.

Most astrologers appear to be more on the liberal end of the spectrum, although I suspect with the resurgence of traditional and ancient forms of astrology we are seeing more conservative astrologers who resonate more deeply with the writings of the ancients than the idea of transformation and letting go of outdated thoughts and ideas.  I tested this on my Facebook page and found that 10% of my readers lean to the conservative end of the spectrum, and 90% to the liberal end.

I believe that as an astrologer I have a duty to be as objective as possible when performing an analysis of an individual’s astrological chart and to use this information to educate and enlighten rather than to trash that individual or disrespect them.  That is sometimes a fine line to walk, especially in today’s supercharged political climate, but I will always make a valiant effort to do so.

I write this post because it’s about time for my sort-of annual Astrological State of the Union post.  Now that I have a clear picture of the fact that quite a few conservative leaning readers still follow me, I will make an extra effort to remain as neutral and factual as possible although I suspect that some of my opinions will bleed through between the lines!