When does the Age of Aquarius start?

When does the Age of Aquarius start? 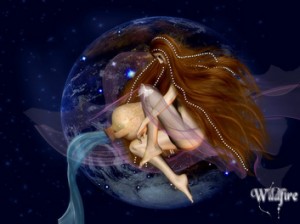 I was unable to find the source for this image – if you are the artist please contact me.

In 1928, at the Conference of the International Astronomical Union (IAU) in Leiden, the Netherlands, the edges of the 88 official constellations became defined in astronomical terms. The edge established between Pisces and Aquarius locates the beginning of the Aquarian Age around the year 2600.

The Austrian astronomer, Professor Hermann Haupt, examined the question of when the Age of Aquarius begins in an article published in 1992 by the Austrian Academy of Science: with the German title Der Beginn des Wassermannzeitalters, eine astronomische Frage? (The Start of the Aquarian Age, an Astronomical Question?). Based on the boundaries accepted by IAU in 1928, Haupt’s article investigates the start of the Age of Aquarius by calculating the entry of the spring equinox point over the parallel cycle (d = – 4°) between the constellations Pisces and Aquarius and reaches, using the usual formula of precession (Gliese, 1982), the year 2595.

This interesting site gives astronomical star maps redrawn from ancient Greek writings to show why this date works. However, because of the lack of clear boundaries between the constellations it is impossible to clearly state a date at which the Age of Pisces will give way to the Age of Aquarius. Astrologers typically give an “orb of influence” of up to 5 degrees for a planet entering a 30 degree sign; the correlating orb for an age that last 2160 years would be a period of about 360 years.

Some writers with a New Age perspective have proposed that we are already in the Aquarian Age because of the accelerating pace of technological inventions. But the transition from one age to another seems to involve no less than a complete shift in cultural paradigms. The last Aquarian Age, at around 28-30,000 b.c.e., marked the abrupt disappearance of the Neanderthals and the sudden takeover of Cro Magnon man.

In the best of all possible worlds, humans could evolve during this phase into enlightened beings, able to link the best of science with the best of spirit in a Utopian paradise of freedom and justice for everyone. Or will we face another future involving the worst of the Aquarian dynamic akin to a science fiction film: a fiercely rational and scientific future that requires perfection, using technology to create perfect humans through cloning and control of the masses via genetically manipulated food and computerized thought police? Like the Terminator and Matrix movies, will machines (technology) take over? Mark Pesce (cited in this article), developer of the VRML markup language, writes:

It could be the perfection of artificial intelligence — emergent, hyperintelligent, possibly malevolent, or the complete mastery of the physical world through nanotechnology — which could melt us all into a puddle of the fabled gray goo, or the radical augmentation of innate human abilities into a final trans-human form.